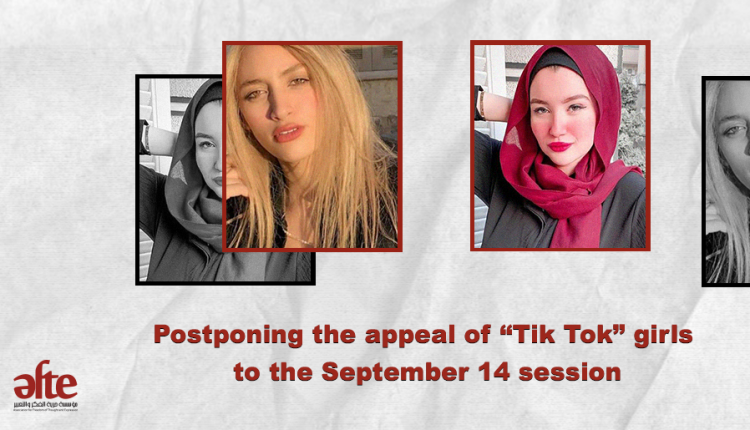 Yesterday, August 17, Cairo’s Misdemeanors Economic Court of Appeal considered the first appeal session in the case of Mawada al-Adham and Hanin Hossam, known as the “Tik Tok” girls’ case. The court decided to postpone the case to the September 14 session to hear the statements of officer Ahmed Taher Nour El-Din, who conducted investigations in Case No. 246 of 2020 Cairo’s Misdemeanors Economic Court of Appeal.

The two defendants were arrested on April 21, 2020, on charges of assaulting family principles and values in Egyptian society by publishing pictures and videos that offend public modesty, in addition to holding immoral meetings by inviting adult and minor girls through an agency via the social media application Likee.

The case sparked a controversy due to the vagueness of the accusations directed against the girls, which are summarized in “assaulting family principles and values in Egyptian society,” especially since other girls have been arrested on similar charges in other cases.

It is worth noting that the case involves male defendants: Mohamed Abd al-Hamid Zaki Mostafa Radi, Mohamed Alaa al-Din Ahmed Mousa and Ahmed Sameh Attia Khalifa; they were accused of creating, managing and using accounts on the Internet with the aim of committing the crime of assaulting principles and values, and possessing software without license.

During yesterday’s session, the defense committee requested the assignment of a technical entity to determine the possibility of penetrating the accounts of Mawada al-Adham on the Internet,  the possibility of publishing material against her will, demining who’s the administrator of the accounts, who published the photos attributed to the defendant, as well as previewing three video clips presented by the prosecution as evidence against the defendant  to determine the time they were created.

The defense submitted a memorandum pleading that the crime of assaulting family values and principles stipulated in Article 25 of law No. 175/2018 on Combating Information Technology Crimes, known as “Anti-Cybercrime Law”, is unconstitutional.

The court had ruled, in the July 27 session, to imprison the defendants for two years and a fine of 300 thousand pounds.