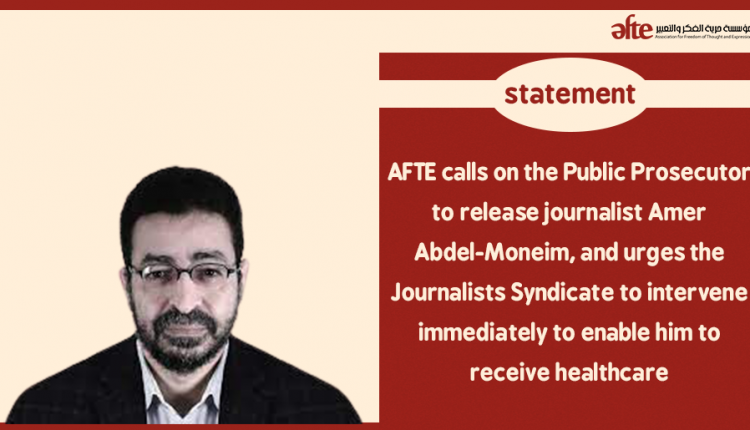 The Association for Freedom of Thought and Expression (AFTE) calls on Egyptian Public Prosecutor Hamada al-Sawy to speedily release journalist Amer Abdel-Moneim, who has been detained in Case No. 1017 of 2020, particularly as his health condition has deteriorated and he has not received the necessary healthcare.

AFTE also calls on head of the Journalists Syndicate Diaa Rashwan and the Syndicate’s Council to intervene to protect Abdel-Moneim, and to ask the Tora Prison administration to allow him access to medicines, books and personal belongings. Abdel-Moneim was arrested for performing his journalistic work. He has not been referred to trial and the State Security Prosecution has not provided any evidence for the charges it levelled against him.

Abdel-Moneim, who has been held in detention for six months now, has a viral infection in the eye. His condition has not responded to medical treatment, so it turned into a chronic infection, the prison’s doctor quoted Abdel-Moneim’s wife as saying. Moreover, Abdel-Moneim suffers severe lower back pain as a result of sitting on the floor all the time.

Abdel-Moneim, 57, has several health problems, most notably diabetes, which threatens to worsen his eye infection. He also had two eye surgeries less than two months before his arrest.

Abdel-Moneim worked as a managing editor of Al-Shaab newspaper, the mouthpiece of the Labor Party (the Independence Party now). He was arrested from his home in Haram district in Giza on 18 December. Two days later, he appeared at the Supreme State Security Prosecution’s office in connection with Case No. 1017 of 2020. The prosecution charged him with joining a terrorist group, spreading false news, and using a social media account to commit a crime. The prosecution remanded him in custody for 15 days pending investigation.

AFTE expressed more than once its appreciation for the mediation efforts made by the head of the Journalists Syndicate, specifically in recent months, which resulted in the successive release of a number of journalists who were imprisoned in connection with various cases. However, these efforts are not enough, in light of the presence of many imprisoned journalists, including those with critical health conditions who deserve immediate release, such as Amer Abdel-Moneim.