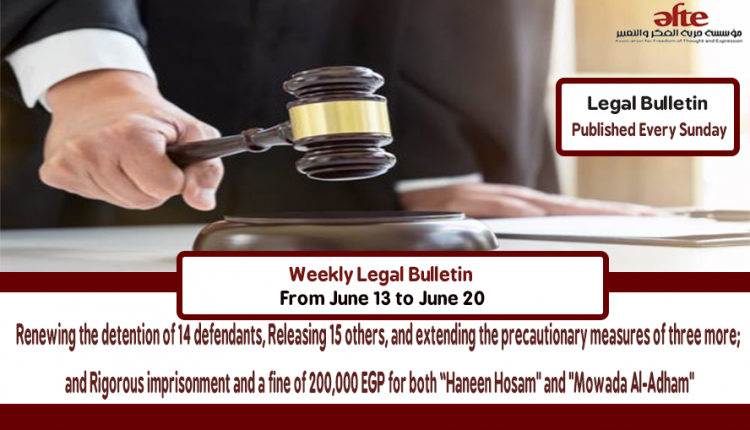 Renewing the detention of 14 defendants, Releasing 15 others, and extending the precautionary measures of three more; and Rigorous imprisonment and a fine of 200,000 EGP for both “Haneen Hosam” and “Mowada Al-Adham”

June 13, 2021: The Third Circuit (Criminal/Terrorism) renewed the detention of 360 Masr Website journalist “Ahmed Mohamed Khalifa” for 45 days, pending Case No. 65 of 2021. “Khalifa” was arrested on January 6, 2021, after he went to National Security Headquarter in Faiyum, after being summoned for investigations, to appear on January 19, at the Supreme State Security Prosecution to be investigated in the case attributed to him.

It should be noted that both the defendants have been recycled in the current case, as “Mostafa Gamal” spent two years and two months in petrial detention pending Case 480 of 2018 Supreme State Security, until the Supreme State Security Prosecution decided to release him under the guarantee of his place of residence, However, he was unlawfully detained in an unknown location until he was recycled pending Case No. 730 of 2020 Supreme State Security, till a judgment was rendered by The Criminal Court to place him under the precautionary measures, and the same scenario was repeated, and he was recycled pending the current case.

And  “Mohamed Safani” spent around 5 months in pretrial detention pending Case No. 751 of 2020,  until December 13, 2020  when The Council Chamber of The Criminal Court issued a judgment to release him with precautionary measures, but the judgment wasn’t implemented, he was unlawfully detained at El-Maragha Police Station until he was transferred to Sohag Security Directorate, to remain in detention for several days until he was presented before the prosecution pending the new case.

However, neither of these release orders were implemented, and they were all recycled in the new Case No. 855 of 2020 Supreme State Security.

June 14, 2021: The Council Chamber of The Criminal Court renewed the pretrial detention of both “Belal Abdel Razek” and “Mohamed Gaber Soliman El-Masry” for 45 days, pending Case No. 488 of 2019 Supreme State Security.

It’s noted that “Belal” was arrested on March 1, 2019, while participating in a vigil in the area of Mohamed Naguib in Alexandria, and “Mohamed Gaber” – member of the Supreme Authority Committee of “Strong Egypt” Party – was arrested on Wednesday, September 25, 2019, from his workplace in the 10th of Ramadan city.

While The Third Circuit Criminal Terrorism renewed the pretrial detention of journalist “Amer Abdel-Moneim” -57 years old- for 45 days pending Case No. 1017 of 2020, the security forces arrested him on December 18, 2020, from his house in Al-Haram area, to appear two days later at the Supreme State Security Prosecution.

“Amer” suffers from a chronic viral infection in his eyes, in addition to diabetes, and he had two operations on his eyes less than two months before his arrest.

AFTE issued a statement calling on the Public Prosecutor to release him and urging the Journalists Syndicate to intervene immediately to enable him to receive healthcare.

And the Third Circuit extended the precautionary measures of defendant “Ahmed Mohamed Hassan Sambo” for 45 days pending Case No. 1116 of 2020 Supreme State Security, Notably, he was arrested on August 12 last year, and he spent nearly ten months in pretrial detention, until a judgment to replace his pretrial detention with precautionary measures was issued on June 6, 2021.

June 15, 2021: The Council Chamber of the Criminal Court renewed the detention of “Islam Ali Muhammed” for 45 days pending Case No. 1898 of 2019 Supreme State Security, and also decided to  extend the precautionary measures for “Mohamed Abdel Monem Abdullatif” for 45 days, while The Third Circuit Criminal Terrorism decided to replace the pretrial detention with precautionary measures of the defendant “Ahmed Muhammad Hosni”, known as “ Ahmed Samy Shuaib”, pending the same case.

And obliged them to pay the expenses and confiscate all the seizures.

the events of the case date back to Friday, June 4, after protests by the residents of the “Shooting Club” district in Alexandria against officials from the governorate, after conducting inventory committees for houses in preparation for their displacement outside the district forcibly to Bashayer Al-Khair district, the security forces arrested a large group of residents, and a group of them was released, while the defendants had been referred to the prosecution for investigations pending that Case, they were charged with inciting rally and demonstration, stone-throwing security forces and causing injuries.

Notably, he had a release order from the Criminal Court on March 21, 2021, pending Case No. 532 of 2021 Shibin Al Qanater misdemeanor with a 5000 Pounds bail, but that order wasn’t implemented, and he was unjustly detained in an unknown place until he was presented before the prosecution.

Human rights organizations condemn the recycling of rights lawyer Mohamed Ramadan into a new case before the Supreme State Security Prosecution, and call for his release