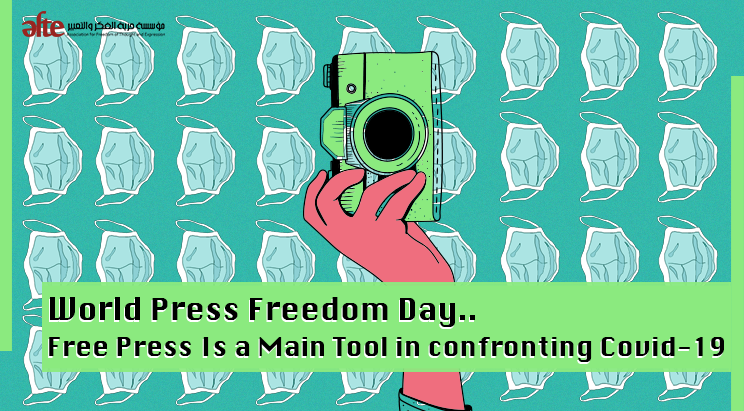 This year the “World Press Freedom Day”, which falls on May 3rd, coincides with the outbreak of the new Corona virus “Covid-19”, which killed more than two hundred thousand people around the world. As a result of this pandemic, most countries tended to impose exceptional measures to confront the spread of the virus. Despite the importance of these measures in many cases to maintain public health, there were concerns about their negative impact on the basic rights and freedoms of citizens, especially press freedom.

These concerns are increasing in Egypt, where the Prime Minister, Dr. Mostafa Madbouly, instructed the authorities to take all legal measures “against anyone who broadcast false news, statements, or rumors related to the new Corona virus”. The Public Prosecution Office said it would “confront the publication of such rumors, statements and false news in compliance with the provisions of the law.”

The Supreme Council for Media Regulation announced that Al-Shoura website has been blocked for 6 months “for publishing statements offensive to pharmacists that were not made by the Minister of Health, stirring up anxiety among readers by questioning the medical system in general and in relation to confronting the Corona crisis in particular, and its use of inappropriate words and phrases.” The Council also “blamed 16 websites and social media pages” for “spreading false news about the discovery of a case of corona virus infection in Tanta.” The council’s statement included the directive to “prohibit the broadcasting of any news except through the official statements of the Ministry of Health.”

On March 17, 2020, the head of the State Information Service (SIS) decided to revoke the accreditation of the correspondent of the “Guardian” newspaper in Egypt, after publishing a report addressing the spread of the Corona virus in Egypt. On March 26, 2020, the “Guardian” published a report saying that the Egyptian authorities forced the newspaper’s correspondent to leave the country.

This climate has made the press coverage of the Covid-19 crisis very limited and cautious, as accusations of spreading false news and rumors and harming the country’s higher interests are enough to close and impose fines on the newspaper, or to permanently or temporarily block its website, in addition to the legal accountability of the journalist.

However, the negative climate with regard to press freedom in Egypt is older than the Corona crisis and the extraordinary measures that accompanied it. We can argue that this hostile climate began since the summer of 2013. Since that time, the Egyptian journalism and media landscape has been re-established institutionally and legally with the aim of achieving full control over it.

On the one hand, the Supreme Council for Media Regulation, headed by journalist Makram Mohamed Ahmed, has imposed, since its inception, its supervisory authorities over all forms of press and media content. The new laws governing the press and media and the sanctions regulation approved by the Council in September 2019 enabled it to subject all entities working in journalism and media to its authority.

On the other hand, over the past years, fundamental changes have taken place with regard to the ownership of private media in Egypt, which resulted in the formation of a new press and media scene owned and managed by monopolistic entities suspected of being affiliated with sovereign security agencies.

Also, SIS and its head, journalist Diaa Rashwan, the current head of the journalists’ syndicate, prosecuted foreign correspondents and the offices of foreign news agencies in Egypt, and imposed restrictions on their work. SIS often accused foreign media of spreading lies and rumors in the coverage of Egyptian affairs, and of being biased to the Muslim Brotherhood.

Moreover, the Egyptian authorities launched an illegal campaign aimed at blocking press and media websites on a large scale. According to AFTE’s latest numbers, 126 websites were blocked since the start of the campaign in May 2017.

In addition to the above attacks on press freedom, many journalists were also detained, among them are the editor-in-chief of “Masr Al Arabia” website,https://masralarabia.net/ Adel Sabri, who has been in remand detention for more than two years pending two different cases, and the publisher and journalist Mostafa Saqr, founder of “Business News” company, which publishes “Al Borsa” newspaper in Arabic and “Daily News Egypt” newspaper in English.

AFTE thinks that demanding press freedom and the right of citizens to know, especially in times of major crises, is not a luxury, but rather a necessity that contributes to protecting societies through the circulation and development of ideas and monitoring decision makers and state institutions. AFTE believes that hostility to freedom of the press and the media intensifies the effects of the crisis and does not contribute to its solution in any way.

AFTE reiterates the calls made by the United Nations Secretary-General, António Guterres, in his speech on the occasion of “World Press Freedom Day”. In his speech Guterres urged governments to protect journalists and others who work in media and to strengthen and maintain press freedom.  “Journalists and media workers are crucial to helping us make informed decisions. As the world fights the COVID-19 pandemic, those decisions can make the difference between life and death,” he explained.

Throughout May 2020, AFTE will publish publications and material related to the detained journalists, blocked press websites, and cases that include restricting press freedom.

On the occasion of “World press freedom day”, AFTE calls on the Egyptian authorities, to take the following measures without delay:

Position Paper: On the Creation of the State Ministry of Information