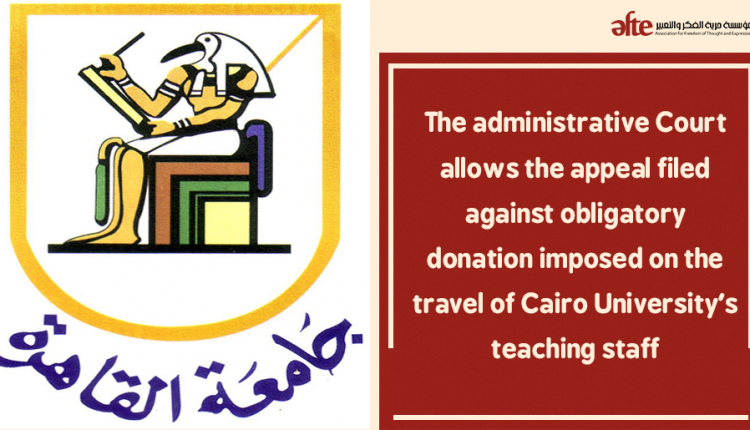 The Fifteenth circuit of the administrative judiciary court decided to allow the appeal on the decision filed by Cairo university to impose donations on faculty members and the university’s assisting body, in exchange for allowing them to travel.

Notably, AFTE has filed a lawsuit by a teaching staff member, before the administrative judiciary court, to appeal on the decision of the Cairo university council to impose donations on faculty members and the assisting body at the university, in exchange for allowing them to travel, lawsuit demanded a halt to implementation and cancellation of that decision, disclosure of the legal basis for collecting these donations and their expenditures, as well as a refund of the donations that were paid by the staff members.

AFTE based its argument on the fact that the decision to impose obligatory donations would restrict academic rights and freedoms as it impedes faculty members from carrying out academic and scientific tasks abroad, as well as inconsistent with constitutional and human rights such as the right to work and to travel, and that Cairo university council has abused the granted power by the mandatory form of the decision, which is incompatible with the fact that it is “donations” given voluntarily and without being forced

Out of Coverage.. The Student Unions’ election in Egyptian Universities during a decade 2011-2020

Releasing Islam Ahmed Samak under guarantee of his place of residence

Egyptian rights groups demand an end to the Israeli attacks and…

The sowing of souls continues: Organizations condemning the execution…