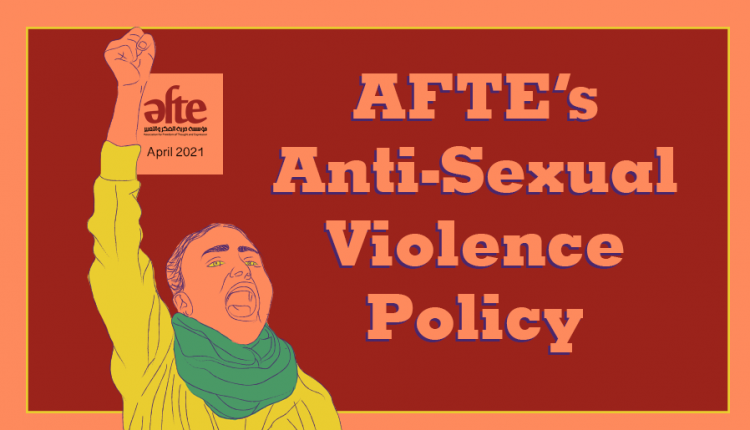 Sexual violence is an important issue in any society around the world. In the Egyptian context, this issue was tackled by several human-rights and feminist groups for more than a century throughout the four waves of the Egyptian feminist movement. Different tools were used to discuss the issues of sexual violence in the public and the private spheres, including determining and updating definitions of the different forms of the crime of sexual violence; exerting pressure to enact laws to punish perpetrators; writing research papers and studies to make important recommendations in this regard; and seeking to establish serious guarantees for the protection of, and remedy to, victims/survivors. Moreover, feminist groups also played an important role in providing different means of support, including legal, medical and psychological support; documentation of testimonies of victims/survivors; launching different campaigns to shed light thereon and advocacy for limiting and preventing gender-based crimes; guaranteeing no-impunity for these crimes; and submitting bills of laws and internal policies against these crimes.

Independent civil society in Egypt includes human-rights and developmental organizations, groups, and institutions as well as political parties. It witnessed the occurrence of some of these crimes therein or them being committed by persons working therein or belonging to it. During recent years, a number of investigation committees were formed to hear complaints related to sexual violence in order to prove that these acts actually occurred and issue necessary recommendations. During the past three years, many of these crimes were revealed on a larger scale because of developing tools of disclosure and uncovering such crimes in the context of civil society. At the same time, several testimonies were published on social media websites, sent via email to groups and organizations themselves, or published in the form of anonymous testimonies of sexual assaults and rape via blogs that were particularly established for this purpose.

In this context, AFTE wrote its policy to combat sexual violence and gender-based discrimination. The purpose of this Policy is to control these crimes, to hold perpetrators accountable; and to guarantee a healthy and protective work environment for all workers.

It is worth mentioning that the objective of this Policy is to strengthen the principle of protection; to establish the spirit of learning; to solidify the principle of respect for the right to bodily integrity for everyone; to build a corrective path based on the spirit of healing, physical integrity and psychological wellbeing and accountability; and to establish necessary measures to guarantee this.

The Importance of Adopting and Implementing an Anti-Sexual Violence Policy

The importance of the Policy against sexual violence and gender-based discrimination is as follows: 1) guaranteeing a healthy and safe work environment for members of the work-team that is free of sexual violence; 2) protecting the dignity and rights of all workers to psychological wellbeing and bodily integrity; 3) raising awareness of the nature of the crimes of sexual violence as lack of knowledge is one of the obstacles facing Egyptian civil society organizations; 4) fostering the spirit of fellowship, preserving the passion of members of the work-team and their interest in what they do, and making them feel comfortable and unthreatened; 5) ending the culture of impunity; 6) providing remedies and ensuring the implementation of the principle of zero-tolerance to sexual crimes and all forms of discrimination; 7) establishing the values of mutual respect among members of the work-team; and 8) establishing the culture of non-violation of the bodies of any member of the work-team.

This Policy is based on several references including the Anti-Sexual Violence Policy of the Egyptian Initiative for Personal Rights (EIPR) and the draft policy of the Bread and Freedom Party, as well as the gender-policy of the Social Justice Platform (SJP). We also reviewed some policies on some websites of a number of universities and regional and international organizations that include regulations related to combating sexual violence within these institutions like the PACT Foundation, the Sample Sexual Harassment Policy of the International Labour Organization (ILO), the Anti-Harassment Policy of the International Union for Conservation of Nature (IUCN) including Bullying and Sexual Harassment for IUCN events, the Canadian Human Rights Commission, and the Policy on Sexual Violence of York University of Canada.

Individual meetings were held with members of the work-team of AFTE (25 out of 26) on Jitsi application. This guaranteed that all members of the team fully participate, and that everybody can talk freely; in addition to the protection of the privacy and confidentiality of all meetings, understanding positive and negative practices and patterns in AFTE, and knowing the points of view of all members of AFTE’s work team regarding the Policy and the code of conduct.

Scope and Application of the Rules of this Policy

First: The Complaint Mechanism and How it is Handled:

Second: Formation of the Investigation Committee

Third: Powers, Regulations and References of the Investigation Committee[1]

Fourth: Principles governing the Work of the Investigation Committee and how it works[2]

– Names of complainees are not made anonymous so that a record is kept of previous complaints against these persons.

– In case any member of the Investigation Committee discloses any information related to the complainant, witnesses, or the complainee (unless s/he is proved guilty or during investigation); s/he should be removed from the Committee and prohibited from investigating any such complaints in the future. In case the member of the Committee is proved to have committed this violation, this has to be announced and the member is convicted in front of the whole work-team of AFTE. S/he is obliged to apologize and is prevented from undertaking any such investigations in the future.

– Gender identities/sexual orientations of the parties of the investigation should not be disclosed unless these people clearly expressed their consent of disclosure.

– The Committee treats all parties of a complaint in a way that is not degrading, mocking to their feelings, or judgemental.

– The Committee may not in any way discuss personal questions that have nothing to do with the content of the complaint like previous relationships, virginity, etc.

– The Committee gives sufficient time to parties of the complaint and witnesses before hearing their testimonies.

– The Committee deals with the complainant and recognizes the impact of the incident on her/his psychological state. This may require hearing the complaint in more than one session, or posing for a while during hearing the testimony. It should be taken into consideration that the complainant may not remember all details in an easy or connected manner.

Malicious/Fabricated complaints are defined in this Policy as those complaints that are proven to be deliberately fabricated by one or more parties, and are proven to be untrue by witnesses or digital evidence like screenshots or a notification of infiltrating the person’s account to send from it photos, messages or any material. The Investigation Committee decides suitable penalties for the complainant in case the complaint is proven malicious. Complaints that could not be proven may not be considered malicious in anyway. Being malicious is only determined by proving deliberate fabrication of details or complaints.

Sixth: Recommendations and Mechanisms of Implementation

In order to submit a complaint to the Investigation Committee, please send a message to the following email: [email protected]

In addition to definitions of sexual violence crimes, it is necessary to define certain terms that are closely related to such crimes and the context they occur in. The following definitions rely on those adopted by institutions and groups working in the public and feminist sphere:

Forms of Sexual Violence include:

– Examining Gaze: Staring or inappropriately looking at the body or parts of the body of someone.

– Comments: Making sexual remarks on someone’s body, clothes, or the way s/he walks, acts, or works.

– Showing unwelcomed interest: Repeatedly requesting to know someone, asking for the phone number of someone, or making invitations for dinner or other suggestions that may carry a sexual nature whether implicitly or explicitly.

– Asking to have sex: Asking someone to have sex, or describing sexual practices or sexual fantasies.

These acts may be practiced face to face, via phone calls, via text messages, or via the internet. Electronic harassment may also include sending inappropriate messages, photos, or videos of sexual nature via email, text messages, social media, forums, blogs, or chat websites on the internet.

Mob-Sexual Harrassment: This includes sexual harassment as defined above if done by more than one person against one or more persons.

Stalking or Following: Following someone – whether closely or distantly, by walking or using a car. It can be repeated or done once. It may also mean waiting outside someone’s workplace, home, or car. Stalking/following may be electronic.

Sexual Defamation: Publishing, leaking or promoting consensual conversations, personal photos, and/or photos of sexual nature on any public social media; or publishing information, secrets or rumors about personal or sexual relations of someone.

Sexual Assault: Committing sexual acts against someone, including forceful kissing, taking clothes off, or grabbing the private parts of someone without their consent.

Rape: Using parts of the body or other objects or tools to fully or partially penetrate the mouth, the anus, or the vagina of someone without their consent.

Gang Rape: Rape committed by a group of people against individual people.

Abuse of Authority, Influence, or Position: Inappropriate use of a position of influence, authority or power against someone in order to ask for or suggest sexual approach. This may take place in an explicit or implicit manner that does not allow the other person to refuse or express his/her refusal freely. It may also include making sexual demands in exchange of performing business or other benefits and services.

The concept of consent differs according to the context. It is not merely evaluated by explicit refusal. There are various factors that may affect consent such as (These are examples and not a full list): The existence of unjust or unequal power relations between the complainant and the complainee that don’t allow the complainant to freely refuse and cause him/her to feel uncomfortable; the consciousness of the complainant at the time of committing the act; the presence of a history of violence and/or threatening between the complainant and the complainee; etc. There is also the factor of surprise which plays a role as it may not instigate an explicit response as the person being violated may freeze. It is worth-mentioning that the duty of the Sexual Violence Complaints Committee is to exert due diligence to ascertain indicators/evidence of the existence or non-existence of consent.