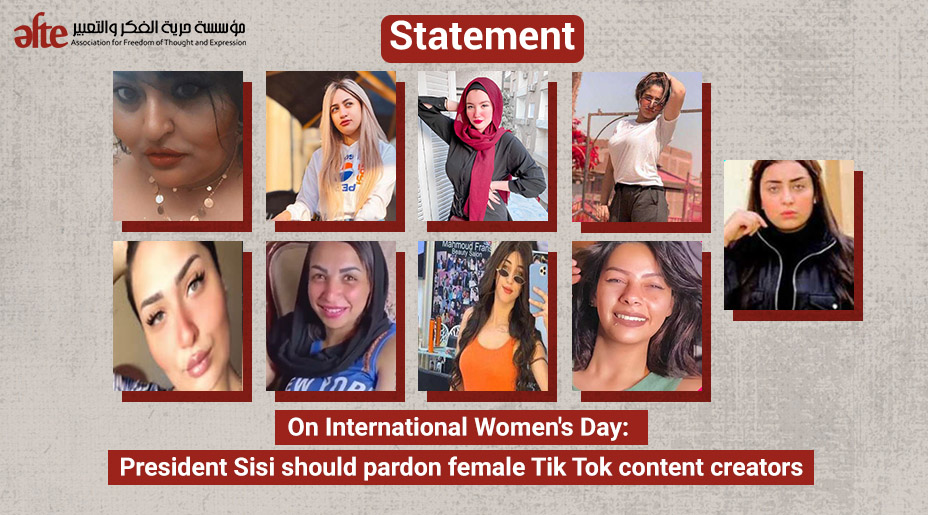 The Association for Freedom of Thought and Expression (AFTE) calls on President Abdel Fattah al-Sisi to pardon the female Tik Tok content creators who have been handed prison sentences on charges related to freedom of expression, in a campaign launched by the Public Prosecution under the pretext of preserving the morals and values ​​of the Egyptian family. The jail terms issued against those women ranged from two to ten years.

Ten female content creators have been prosecuted over the past two years, namely Haneen Hossam Abdel Qader, Mawaddah Al-Adham, Manar Samy, Hadeer Al-Hady, Renad Emad, Passant Mohamed, Moka Hegazy, Yasmine Abdel Razek, Sherry Hanem and her daughter Zomoroda. They were arrested at different times during the past two years for posting videos on Tik Tok, which the Public Prosecution considered indecent and infringing on the Egyptian family values. The official accusations levelled against those women varied according to each case, and included accusations of human trafficking and prostitution.

Director of AFTE’s Legal Aid Unit Fatma Serag said: “Most of the rulings issued against those female Tik Tok content creators are final, and there are still other stages of litigation that take longer. There are no indications about the judiciary’s protection of freedom of expression. So, we believe that the best way to end these cases and restore the freedom of those women is for President Sisi to use his powers and issue a presidential pardon for them, and this goes in line with Article 155 of the constitution.”

Serag noted that AFTE had filed appeals against the rulings issued against Mawaddah Al-Adham, Sherry Hanem and Zomoroda, however, the Court of Appeals has not set a date for examining the appeals so far. Last year, AFTE created a special section for Tik Tok cases that includes profiles of the female content creators who were prosecuted. That was followed by intense campaigns calling for their release.

AFTE believes that these rulings came as a result of a systematic security campaign aimed at imposing moral and societal guardianship on social media users, especially women.

AFTE stresses the need to use the legal powers granted to the President of the Republic to end the cases of women who have been targeted for expressing their views, at a time when state institutions declare their desire to respect freedom of expression and women’s rights.