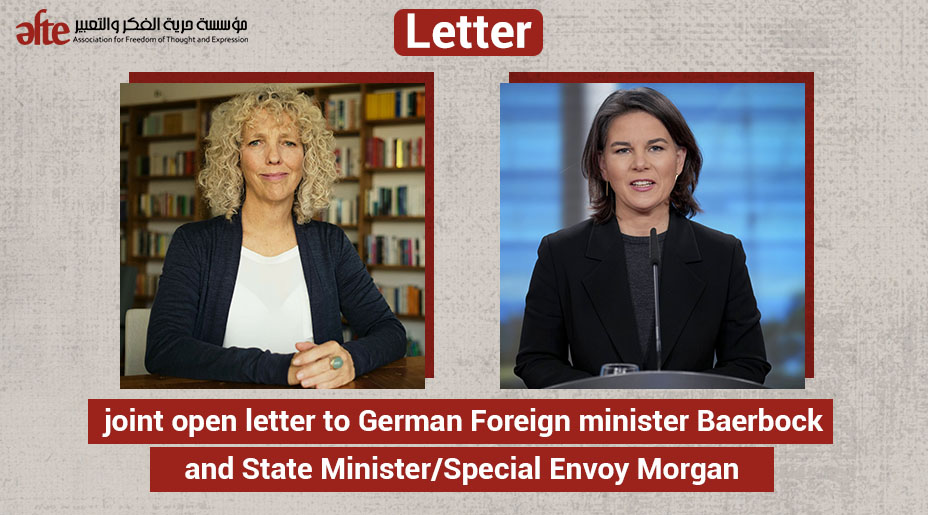 Ahead of the 18-19 July 2022 Petersberg Climate Dialogue, which you will co-chair with Egyptian President Abdelfattah al-Sisi, we 21 national, regional and international civil society organisations are writing to urge you to press President al-Sisi, publicly and privately, to take prompt and effective measures to reopen civic space in Egypt ahead of the COP27 in Sharm el-Sheikh and release all the individuals arbitrarily detained for exercising their rights to freedom of expression, association and peaceful assembly. If taken, these important steps must not be reversed after the COP27, since they are necessary to guarantee the survival of independent civil society in Egypt and promote its resurgence.

We stress our alarm at the Egyptian authorities’ unlawful restrictions on the rights to freedom of the press, freedom of expression, association, and peaceful assembly, the severe constraints they have imposed on civil society, as well as their repression of peaceful political opposition and misuse of counterterrorism legislation to silence peaceful critics. Thousands continue to be arbitrarily detained in Egypt for peacefully practicing their rights to freedom of expression, assembly, and association. This includes staff of Egyptian independent civil society organizations, human rights defenders and activists in the field of economic, social, and cultural rights, and minority rights, as well as lawyers, journalists, academics, women social media influencers and artists. We consider that immediately and unconditionally releasing them, according to Egypt’s obligations under international law, would signal that the Egyptian government is committed to ensuring that participants at COP27 may speak and assemble freely at the COP27 conference, without fear of reprisals.

The UN Special Rapporteur on the rights to freedom of peaceful assembly and association’s 2021 report details the essential role played by civil society in addressing the climate crisis, and calls on States “to recognize publicly at the highest levels the work of civil society and the importance of the rights to freedom of peaceful assembly and of association as essential to the advancement of climate action and just transition” towards environmentally sustainable economies and societies. Indeed, for a productive COP27, the crucial roles of civil society as well as independent media are more necessary now than ever, as many states are failing to meet their climate pledges and others are unable to finance measures to make their development sustainable. The visibility and positive pressure created by civic mobilisation is needed if COP27 is to be a success. The rights to freedom of assembly, association, and expression at COP27 must be upheld for all, including Egyptian civil society activists and journalists who are currently facing harsh repression for exercising these human rights.

Therefore, it is urgent that at and around the Petersberg Climate Dialogue, you urge the Egyptian authorities to take action now, before COP27:

We understand that many African states support the selection of Egypt as host of COP27, on the assumption that Egypt could be a strong voice for the continent’s climate justice needs and demands, notably climate finance. Yet there are serious and unresolved concerns around the full and meaningful participation of activists, mainly from the global South, in terms of accessing visas to enter the country. If the Egyptian authorities do not change course, they risk jeopardizing COP27’s success, and there will be well-grounded concerns for the safety and security of civil society activists from African states, from Europe, and elsewhere, who may seek to participate in peaceful events in Sharm el-Sheikh.

Minister Baerbock, your nomination eight months ago as federal Foreign Affairs Minister gave much new hope and expectation that you would be determined and able to set a clear foreign policy approach toward countries with abusive human rights records, and upholding your government commitments to human rights, the rule of law, justice, and accountability within a climate-friendly and feminist foreign policy. The federal coalition government agreement text also bolstered that hope. Today, we call on you both to bring these hopes to fruition and demonstrate your leadership for climate justice with Egypt, through an inclusive approach to environmental policy rooted in the principle that there can be no climate justice without respect for human rights.

Association for the Freedom of Thought and Expression (AFTE)