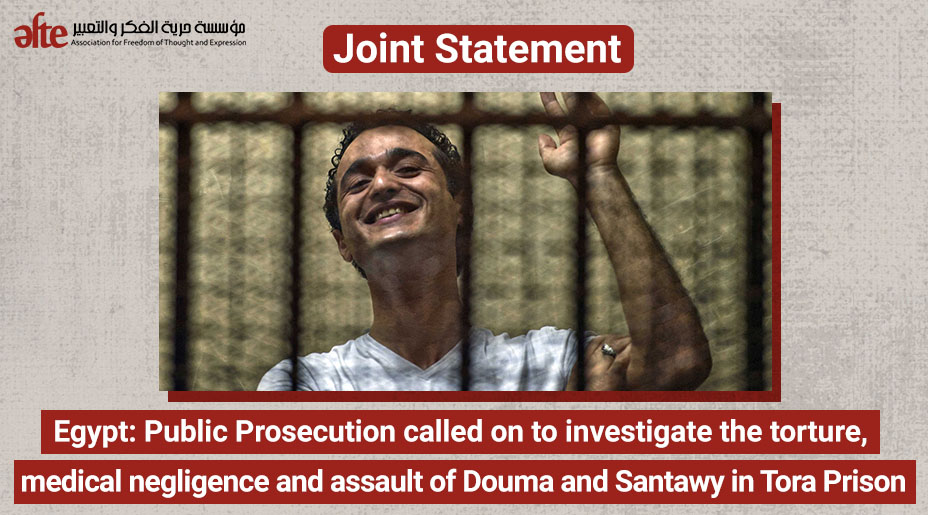 Egypt: Public Prosecution called on to investigate the torture, medical negligence and assault of Douma and Santawy in Tora Prison

The torture and assault of political activist Ahmed Douma, and the medical negligence and assault of researcher Ahmed Samir Santawy is condemned by the undersigned human rights organizations. The undersigned call on the Public Prosecution to launch an urgent and immediate investigation into the aforementioned incidents, which took place on 19 July in Tora Prison in southern Cairo, and to hold those responsible to account. The Public Prosecution is further called upon to acknowledge and address, rather than continue to ignore and disregard, the reports submitted to the Public Prosecutor regarding violations in detention sites and prisons.

In a letter leaked from his prison cell dated 19 July, Douma recounted the violations inflicted upon him and Santawy.  Douma accused the chief of the investigation unit at Tora Prison, officer Ahmed Zain, of torturing, physically assaulting, and verbally insulting him, following altercations that occurred with the prison administration over their medical negligence and delay in providing emergency medical care to researcher Santawy, who displayed severe symptoms indicating that he was infected with Covid-19.

According to Douma’s letter, Santawy felt suffocated inside his solitary cell, which does not exceed an area of 2 x 2.5 meters, as a result of large quantities of liquid chlorine being sprayed in the ward to disinfect it after Covid-19 infections were reported there. The prison administration was very slow in providing urgent health care to Santawy; it did not allow the cell door to open until about an hour after the distress call was made.

Although the cell door was opened, the prison administration refused to take Santawy to the clinic until he wore a jacket, which incited verbal altercations that led to him falling to the ground from exhaustion. He was then taken to the hospital. The chief of the investigation unit at the prison, Ahmed Zain, ordered Douma to be handcuffed and taken to the prison administration headquarters, where the officer brutally assaulted him.

As a result of these assaults, Douma, who is serving his ninth year in prison, suffers from injuries, abrasions, and bruises throughout his body, some of which have yet to heal.

The prison administration has refused to write an official report to investigate Douma’s torture of and assault, despite his request to summon the prosecution. It also refused to report Santawy’s complaint or to write a report regarding the medical negligence and assault perpetrated against him. It further prevented Douma’s family from visiting him on the legal date of the visit.

Likewise, the head of the Strong Egypt Party, Abdel Moneim Aboul Fotouh, has suffered from consecutive heart attacks in his prison cell that required emergency health care. Hisham Fouad was infected with the Coronavirus inside his prison. In addition, the prison administration has claimed that activist Alaa Abdel-Fattah has refused a family visit after 115 days of his hunger strike. Yet the prison administration has neither given an explanation for his refusal nor has it disclosed his current health condition. This leads us, the undersigned, to be increasingly alarmed about the fate of Abdel-Fattah and many others inside Egyptian prisons, especially the elderly and infirm, whose health conditions require them to be transferred to hospitals outside the prison to receive necessary medical care, including surgeries and other urgent care for medical emergencies.

The Association for Freedom of Thought and Expression (AFTE) submitted a report (No. 179665) to Public Prosecutor Hamada al-Sawy on behalf of Douma on 25 July 2022, demanding an investigation into the aforementioned allegations of torture, medical neglect, and physical and verbal assault and abuse.

The undersigned organizations call on the Public Prosecution to investigate those responsible for the torture and assault of Douma, and the medical negligence and assault of Santawy. We warn that continued impunity for perpetrators would encourage the repeated perpetration of such crimes while worsening already dire and deteriorating conditions in Egyptian prisons.

El Nadim Center For Management & Rehabilitation of victims of violence