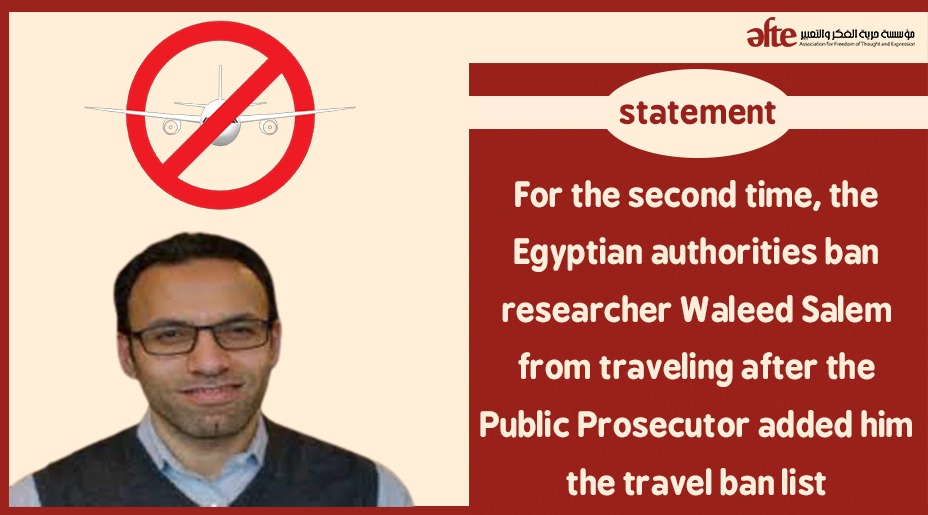 The undersigned human rights organizations condemn the banning of Waleed Salem, a doctoral researcher at the University of Washington, from traveling for the second time on 24 May 2021, and adding his name to the travel ban list, upon a decision from the Public Prosecutor.

Salem booked an Air France flight bound for France on 24 May 2021, but the Cairo Airport authorities stopped him and informed that his name was added to the travel ban list upon a decision issued the previous day (23 May) by the Public Prosecutor, without providing clear legal reasons or a specific period of the travel ban.

Salem was banned from traveling for the first time on 8 May 2020 while he was traveling to the United States, where he had been living for 12 years. The Cairo Airport authorities searched his bags and withdrew his passport.

Salem was arrested on 23 May 2018 after meeting a university professor as part of his doctoral research about the history of the Egyptian judiciary. He appeared at the State Security Prosecution’s office as a defendant in Case No. 441 of 2018, where he was charged with spreading false news and joining a terrorist group. He was detained in Tora Prison for more than six months until he was released pending investigations on 3 December 2018 under precautionary measures. On 22 February 2020, the Supreme State Security Prosecution cancelled the precautionary measures imposed on him and released him under guarantee of his place of residence.

Since then, Salem has not been summoned or questioned again. When he was first banned from travelling on 8 May 2020, the Cairo Airport authorities did not tell him whether a judicial order was issued against him. In March 2021, Salem’s lawyer checked whether his client’s name was added to the travel ban list, and he found out that Salem’s name was not there on the list. Then, Salem tried to travel again after he spent more than two years between pretrial detention and precautionary measures, as he was not convicted.

Banning Salem from travelling is considered a complementary punishment after he was detained for more than 6 months pending investigation. This comes more than two and a half years after the prosecution levelled charges against him. The latest travel ban decision was issued without clear legal reasons.

The undersigned organizations remind the Egyptian government that restricting freedom of travel in this way violates the citizens’ right to freedom of movement, which is guaranteed in Article 62 of the Egyptian constitution. It also contradicts the International Covenant on Civil and Political Rights, which stresses the protection of freedom of movement, as Article 12 of the Covenant states: “Everyone shall be free to leave any country, including his own. The above-mentioned rights shall not be subject to any restrictions except those which are provided by law, are necessary to protect national security, public order, public health or morals or the rights and freedoms of others, and are consistent with the other rights recognized in the present Covenant.”

The undersigned organizations consider that travel ban is part of violations committed against Egyptian researchers and academics, whether by arresting them at airports upon their return from abroad where they study or by imposing illegal restrictions on their travel from Egypt to continue their studies abroad, as is the case with Salem.

The undersigned organizations call on Public Prosecutor Hamada al-Sawy to remove Salem’s name from the travel ban list and enable him to travel to the United States to continue his study. They also call on the Egyptian authorities to put an end to the unjustified restrictions they impose on Salem.