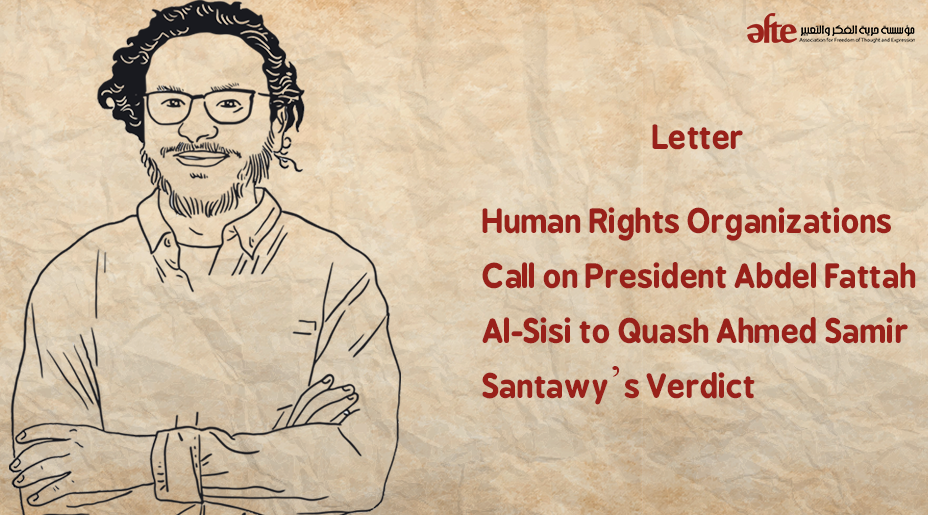 The undersigned organizations call on Egyptian President Abdel Fattah Al-Sisi to quash the verdict against Ahmed Samir Santawy, an Egyptian researcher and anthropology student at the Central European University (CEU) in Vienna, Austria. On 22 June 2021, an emergency court sentenced him to four years in prison on charges of publishing “false news”. His conviction is based solely on social media posts criticizing human rights violations in Egypt and the state’s mishandling of the pandemic. Since 23 June, Ahmed Samir Santawy has been on hunger strike to protest his unjust conviction; his life is at serious risk.

Verdicts issued by the Emergency State Security Court, a special court that operates under a state of emergency, cannot be appealed and are only subject to the president’s authorization. The state of emergency, imposed by President Sisi since April 2017 and renewed every three months with parliamentary approval, further undermines the rule of law in Egypt.

Ahmed Samir Santawy was arbitrarily arrested on 1 February 2021 after being subjected to torture and other ill-treatment by officials of the National Security Agency (NSA), a specialized police force, shortly after his arrival from Vienna where he was studying. They subjected him to enforced disappearance for five days. During that time, they beat and questioned him about his academic work on women’s sexual and reproductive rights.

On 6 February, the Supreme State Security Prosecution (SSSP), a special branch of the Public Prosecution responsible for prosecuting crimes that relate to “state security”, ordered his  detention pending investigation over unfounded terrorism-related charges on the basis of secret NSA investigations that neither he nor his lawyers have been allowed to examine.

Following a global campaign calling for his release, the Egyptian authorities referred him to trial in a separate case. On 22 May, the SSSP opened a new criminal investigation against him over social media posts, and on 28 May, referred him to trial over the charge of spreading “false news to undermine the state, its national interests and public order and spread panic among the people” under article 80 (d) of the Penal Code. One month later, Ahmed Samir Santawy was sentenced to four years imprisonment on the basis of social media posts criticizing human rights violations in Egyptian prisons and the state’s mishandling of the pandemic that he denied writing.

During the hearing on 22 May 2021 before the SSSP, Ahmed Samir Santawy told prosecutors that he had been beaten the previous day by the deputy warden of Liman Tora prison. His lawyers requested his transfer to the Forensic Medical Authority to examine his injuries. On 25 May, the Ministry of Interior denied the allegations. No investigations have been conducted into these claims, as well as his previous complaints to prosecutors of being subjected to enforced disappearance, torture and other ill-treatment following his arrest on 1 February 2021 by the NSA.

The undersigned organizations urge President Sisi to use his legal authority to quash the unjust verdict against Ahmed Samir Santawy. The Attorney General must drop all the investigations into unfounded terrorism-related accusations against Santawy and release him immediately and unconditionally. The authorities must also conduct prompt, independent, impartial and effective investigations into allegations of torture and other ill-treatment. Pending his release, the authorities must grant him regular access to his family, lawyers and timely adequate healthcare.