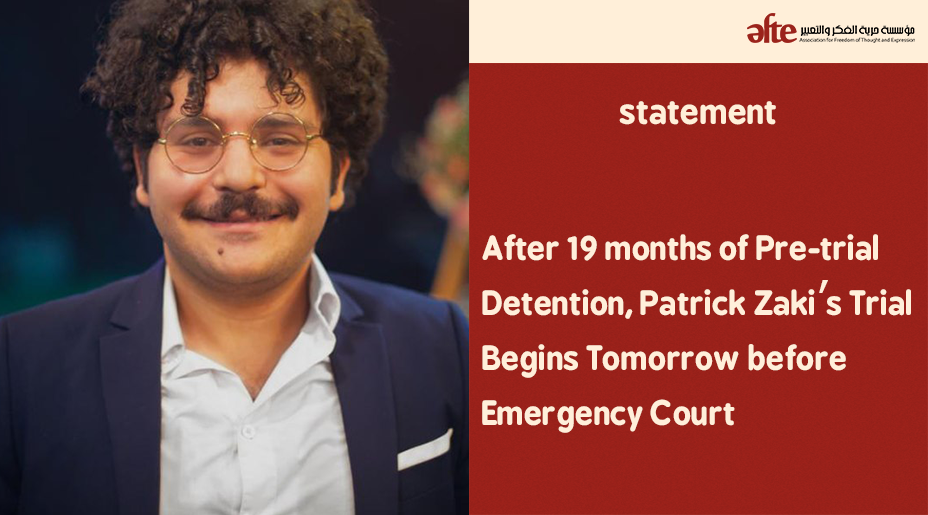 The undersigned organisations condemn the decision of the State Security Supreme Prosecution (SSSP) to indict Patrick Zaki, the researcher at the Egyptian Initiative for Personal Rights (EIPR), on charges of “spreading false news inside and outside of the country”, based on an opinion article published two years ago.

The first trial session will be held tomorrow, Tuesday September 14 2021, before the Mansoura II State Security Misdemeanors (emergency) Court. Zaki was indicted based on articles 80 (D), and 102 (bis) of the penal code.

According to the SSSP, the indictment was based on an article published on Daraj, in July 2019, titled “Displacement, Killing and Restriction: A Week’s Diaries of Egypt’s Copts”. The article presents a week in Zaki’s life as an Coptic Egyptian reacting to current events concerning Egyptian christians, both as a public and personal issue of interest.

Trying Zaki before an exceptional court, whose rulings are not subject to appeal, on “charges” of publishing an article in which he recounts his life as a Christian Egyptian, and after 19 months of remand detention without legal justification, proves that the only reason for denying Zaki his freedom is his practice of his right to free speech in defense of his rights, and the rights of all Egyptians — and especially christian Egyptians — to equality and full citizenship.

The undersigned organisations condemn this attack on Patrick George Zaki, and recognise it as an infringement on the rights of all Egyptians to freedom of expression, and the rights of Christian Egyptians in particular to demand their right to equality both socially and in front of the law.

And we can not ignore the irony that Zaki’s indictment and trial before an exceptional court comes the day after the launch of the state’s human rights strategy, in an event in which the president has spoken at length about the right to freedom of religion and belief and the right to equality.