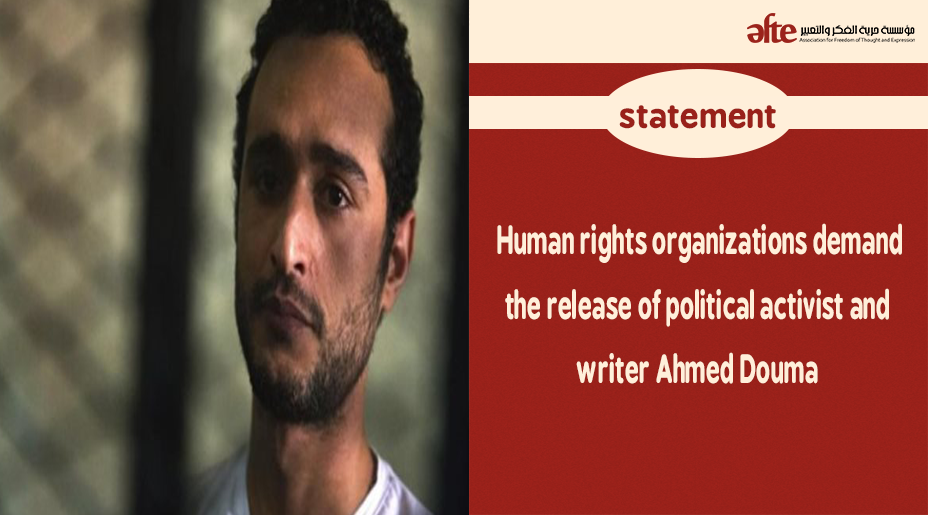 On December 3, 2021, Ahmed Douma, writer, political activist and one of the most prominent symbols of the January 2011 revolution, enters his eighth year of arbitrary detention, against the background of his political activism and his relentless pursuit of freedom and democracy. Ahmed Douma contributed to the establishment of a number of the most important protest movements in Egypt, such as the Kefaya Movement, which had a pivotal role in igniting the January Revolution. Douma is also one of the founders of the Revolutionary Youth Coalition.

Douma was arrested in December 2013, against the background of his presence in the vicinity of Abdeen Court, during a demonstration against the protest law. He was sentenced – along with Ahmed Maher and Muhammad Adel – to three years in prison, and three years to police surveillance. Before the end of his sentence, the Cabinet case was opened to thwart his release from prison. He was sentenced to life imprisonment and a fine of 17 million pounds in a trial known for lack of impartiality by judge Mohamed Nagi Shehata, who was famous for his hostility to Ahmed Douma and the January Revolution.

Douma’s lawyer appealed the ruling issued by the Criminal Court, and he had a retrial before a new circuit, which sentenced him to 15 years in prison and a fine of 6 million pounds. Thus, Ahmed Douma’s defense team had exhausted all national litigation avenues. During all stages of his trial, Douma and his defense team were exposed to grave violations and breaches of the principle of criminal justice. The trial was unfair and lacked the principle of impartiality, which was confirmed by the political sermon delivered by Judge Mohamed Sherin Fahmy before the verdict was pronounced, which overflowed with hostility to the January revolution and those who participated in it.

Ahmed Douma is still detained in the notorious Tora prison, in inhumane conditions in a small cell that lacks good ventilation. For months he was denied exercise outside the cell or sleeping on a bed. Moreover, Douma was prevented from receiving any visits from his family for a period of six months, due to restrictions imposed against the background of the spread of the Covid-19 virus. Since the resumption of prison visits, only one family member is allowed to visit for 20 minutes per month. During his prolonged imprisonment, Douma’s life was endangered after he was targeted by extremist groups inside prison, and the prison administration failed to intervene to protect him.

Ahmed Douma’s health condition has steadily deteriorated since his imprisonment eight years ago, as a result of his being placed in solitary confinement for more than six years from December 2013 to February 2020, in addition to the poor health care in Egyptian prisons in general. All these conditions have led to many setbacks to his health. He is now suffering from erosion in the knee joints, chronic inflammation of the nerves, slipping and spraining of the back and neck vertebrae, depression and severe anxiety attacks, stiffness in the shoulder joint, severe attacks of migraine, irregular heartbeats, blood pressure disturbances and other health problems.

“Curly” a book of poetry, which Douma wrote while in his solitary confinement was confiscated from the Book Fair by security authorities who banned its printing and distributing.

After Douma and his defense team have exhausted all available paths for redress, and after spending more than eight years behind bars, deprived of his right to treatment, education and humane treatment, we, the undersigned demand the immediate release of writer and activist Ahmed Douma.