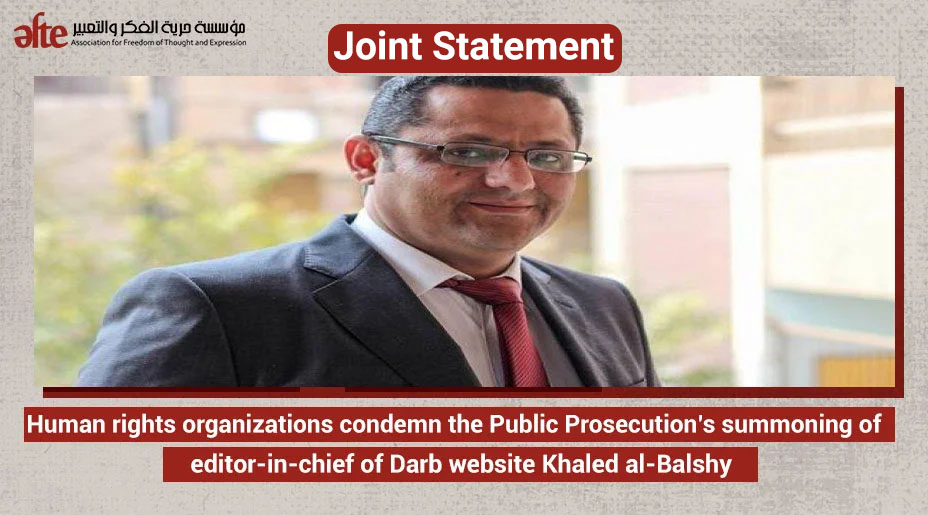 The undersigned human rights organizations condemn the Public Prosecution’s summoning of editor-in-chief of Darb website and former member of the Journalists Syndicate’s Council Khaled al-Balshy to question him over reports submitted by unknown persons accusing him of spreading false news on Facebook. The organizations call for the investigations into these reports to be shelved and closed permanently. They also call for an end to the continued targeting of Balashy and the press institutions he chairs.

Balshy said on Facebook on 27 December that he had appeared before the Central Cairo Prosecution for investigation regarding nine reports submitted by unknown persons accusing him of publishing false news on his Facebook account and the account of Darb website as well. The prosecution, however, postponed the investigation to 4 January 2022.

According to Balshy, the reports submitted against him revolve around several press reports published on Darb website about the last parliamentary elections, including a report by the National Council for Human Rights on the first phase of the elections, in addition to other reports on the conditions of prisoners of conscience.

The summoning of Balshy is the latest in the series of targeting the independent journalist. The Egyptian authorities had earlier blocked four news websites chaired by him, without knowing the party responsible for the blocking or the reasons behind the move. The latest of these was the Socialist Popular Alliance Party’s website “Darb” which was blocked in April 2020, less than a month after its launch.

Darb is one of the few independent news websites that still publish reports from inside Egypt despite the blocking and the security difficulties that its team face when covering events on the street, thus exposing the website to constant security targeting. The Egyptian authorities try to generalize their narrative about any event and prevent the publication of any news or opinions that criticize or belie that narrative.

The continued targeting of Balshy indicates the false allegations of the Egyptian authorities that they intend to introduce tangible changes to the human rights situation in Egypt and respect media freedom. The authorities claimed that these changes began with the launch of the first national human rights strategy aimed at making improvements to the conditions and status of a number of rights and freedoms over the next five years.

The undersigned organizations call on the Public Prosecutor to shelve the reports submitted against Balshy. They also call on the Egyptian authorities to stop targeting Balshy and the Darb website.