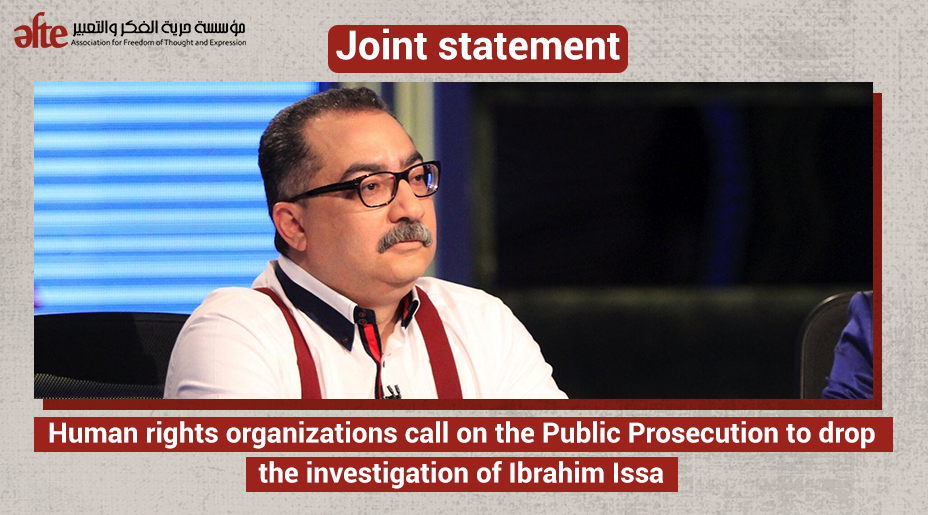 The organizations believe that such steps fundamentally violate the right to freedom of expression, which is guaranteed by the constitution, and also contradict the national human rights strategy launched by President Abdel Fattah al-Sisi last year, which stipulates that the government shall continue efforts to protect media professionals and journalists during their work, in accordance with the constitution and the laws regulating this.

Issa had earlier made statements, during his show “Cairo Talk” on Al-Qahera Wal-Nas TV, in which he criticized Muslim clerics and preachers, arguing that people do not need them at this time. He went on to say that preachers promoted delusional and defective stories. He claimed that the “Israa and Miraj”, the night journey of the Prophet Muhammad from Mecca to Jerusalem, from where he ascended to the heavens, was “a completely delusional story”. He said Muslim preachers only cite books that confirm the event but ignore others that deny it happened.

Issa’s remarks stirred widespread controversy, and he came under fire from some media outlets. On social media, meanwhile, many called for banning Issa from appearing on TV. For its part, Al-Azhar – the highest Sunni authority in the Muslim world – issued a statement stating the Israa and Miraj journey definitely happened, and cannot be denied in any way.

These responses come within the framework of presenting the opinion and the counter opinion, which is a right guaranteed to all. However, the Public Prosecution decided to launch an investigation into complaints lodged against Issa, accusing him of contempt of Islam.

The organizations affirm that what Issa has done is a natural exercise of his legitimate right to express his opinion, which is guaranteed by both the constitution and the law. Article 65 of the constitution stipulates: “Freedom of thought and opinion is guaranteed. All individuals have the right to express their opinion through speech, writing, imagery, or any other means of expression and publication.” Also, Issa – in his capacity as a journalist – has the right to work freely and without restrictions. Article 71 of the constitution stipulates: “It is prohibited to censor, confiscate, suspend or shut down Egyptian newspapers and media outlets in any way. Exception may be made for limited censorship in time of war or general mobilization. No custodial sanction shall be imposed for crimes committed by way of publication or the public nature thereof. Punishments for crimes connected with incitement to violence or discrimination amongst citizens, or impugning the honor of individuals are specified by law.”

Therefore, the Supreme Constitutional Court, in a clear ruling in Case No. 37 of Judicial Year 11, stated that “the constitution was keen to impose restrictions on the legislative and executive authorities to guarantee the preservation of public rights and freedoms of all kinds, so that none of them would invade the area protected by rights and freedoms, or intersect with them in a way that prevents their exercise in an effective manner. The development of these rights and freedoms through continuous efforts that seek to establish their international concepts among civilized nations was a basic demand to confirm their social value and appreciate their role in satisfying the vital interests associated with them, in order to deter every attempt to attack them. In this context, interest in public affairs has increased in various fields.”

The organizations call on the Public Prosecution to drop all the complaints filed against Issa, as there is no crime in the first place. Issa’s remarks are just opinions that he expressed, and they should be protected, rather than withholding them and punishing their owner.