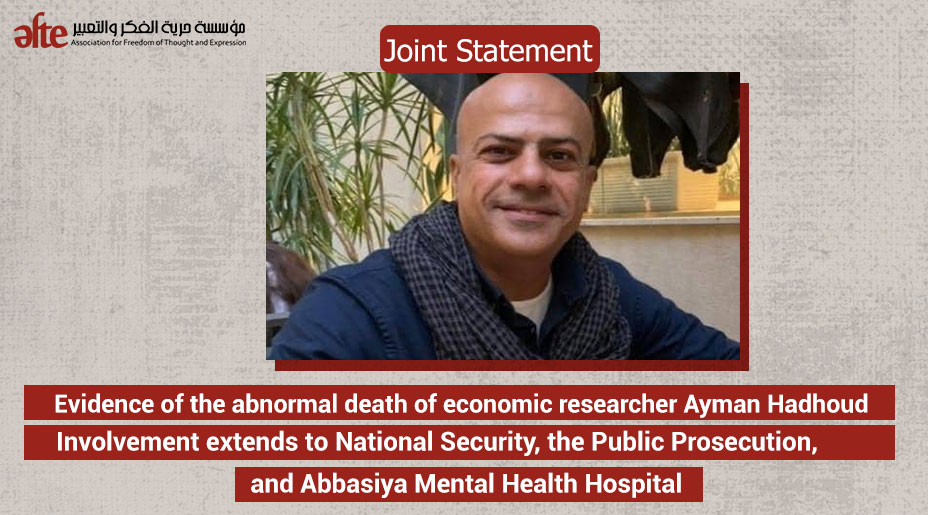 The undersigned human rights organizations followed up on the tragic circumstances of the death of economic researcher Ayman Hadhoud, which was announced by his family on April 9, after they received a call from a police officer informing them of his death, asking them to come the next day to receive the body from the mortuary of Abbasiya Mental Health Hospital. The undersigned organizations condemn the practices of the parties involved in concealing the truth and the reason for the detention of researcher Ayman Hodhoud, starting with the National Security, the Abbasiya Mental Health Hospital and the Public Prosecution, especially in light of several indicators of a criminal act behind the death of Hodhoud, as he was alive on the evening of February 6 when he was arrested. On charges of alleged theft, the family received his body on April 11 from the Zeinhom Morgue.

According to what we learned from the family’s statements, the prosecution’s investigations with his brothers and sources in Abbasiya Hospital, the events developed as follows:

Ayman Hadhoud’s family had lost contact with him since February 5, 2022, when the last meeting took place with his brother Omar. While the family was looking for legal ways to report Hadhoud’s disappearance, on February 8, a police officer from the Amiriya police department, the district of the family’s residence, came and requested the presence of Ayman Hadhoud’s brothers at the station. Accordingly, his brother Adel and a family friend went to the police station, where they were met by a National Security officer named Yassin Mustafa, who asked them several questions about their brother Ayman, his workplace, field of study and activity. They were also asked about his other brothers and their places of work, and informed them at the end of the meeting that Ayman Hodhoud is being held by National Security, and that they will be contacted if more information was needed.

Sources close to Hodhoud stated that before his arrest, he was upset by the security interference in political life, which led to the exclusion of party cadres in favor of businessmen and the wealthy. This opinion, which the deceased might have written about on his laptop, or could have been on his mobile could point to a vengeance on the part of the National Security officers who detained and interrogated him, outside the framework of the law. Hadhoud’s family was informed that he did not have any belongings on him at the time of his arrest, and the family did not retrieve his laptop or mobile phone.

Given that the family obtained direct information from National Security about their brother, in addition to the fact that Ayman Hadhoud was a member of the Supreme Authority of the Reform and Development Party and a former economic advisor to Muhammad Anwar al-Sadat, member of the National Council for Human Rights, the family preferred not to submit an official report of his disappearance and to rely on mediation and informal efforts whether from the party or family friends, hoping for his release and that he not be indicted in a case of a political nature. His family told the mediators that they had feared he would be subjected to harm prior to his detention, given that he had recently suffered from psychological pressure.

On February 17, 2022 the family received unofficial information from a family friend that their brother, Ayman, was held at the Abbasiya Mental Health Hospital to which he was admitted three days earlier. According to prosecution’s investigations, Ayman was admitted to hospital on the 14th of February, meaning that he remained in the custody of National Security for seven days without being transferred to the hospital.

Despite their continuous search for information regarding their brother at the public prosecution, the family did not obtain any information indicating any charges against their brother Ayman. Then, the family tried to visit Ayman Hodhoud at the Abbasiya Mental Health Hospital, based on unofficial mediation, and none of the family or Hadhoud’s friends and colleagues succeeded in seeing him. The hospital director informed one of his friends on February 23 that Hodhoud is in good health and that he is under observation at the request of security authorities, and that they must obtain a permit from the security or the Public Prosecution to visit him, because the forensic medicine department is not under the authority of the hospital. He also told him that Hadhoud is accused in a criminal case of attempting to steal a car in Sinbillawain (a city in the Delta). Meanwhile, the National Security Agency stopped providing any information about Ayman Hadhoud’s fate, and told the mediators that they had completed a security check, and that his problem was a criminal one, and not within the scope of their concern.

The family continued its attempts to obtain information from the Public Prosecution or to visit him at the Abbasiya Hospital. In March 2022 the hospital denied the presence of Hadhoud altogether, while the public prosecution claimed they had no registration of a defendant with the name of Ayman Muhammad Ali Hadhoud.

At the beginning of April, one of Hadhoud’s friends was able to find out that he had died in the Abbasiya Mental Health Hospital about a month ago, and that there was no information regarding the whereabouts of his body. Some of Hadhoud’s friends began declaring his enforced disappearance and his presence in the custody of National Security. His family returned to the member of the National Council for Human Rights, Muhammad Anwar Al-Sadat, and submitted a complaint dated 7 April 2022 about the detention of their brother by National Security to the President of the National Council for Human Rights, Mushira Khattab.

These attempts led to a change in the National Security approach to conceal his body and obfuscate the case in preparation for his burial in the charity cemetery without the knowledge or notification of his relatives. On April 10th, the family sought to receive a permit from the Public Prosecution to bury him, but they were surprised by the presence of a pre-prepared permit to bury him in charity graves as unidentified. They had to return to the Public Prosecution Office to cancel this permit. The prosecution interrogated his brothers, Adel and Abu Bakr, about the circumstances of his death.

The undersigned organizations would like to draw attention to the following points that require clarification:

Ayman Hodhoud, alive and dead, was subjected to severe violations: Since his kidnapping to his placement in a mental health hospital 12 days after his disappearance and 10 days after the Public Prosecution’s decision to transfer him, and leaving his body to decompose in an undesignated place for more than a month before being presented to forensic medicine.

Between his disappearance and his death, things happened that led to the death of a prominent Egyptian economist and a well-known Egyptian politician. The parties involved in the course of the last days of his life must be held accountable and questioned about what happened to him, whether it was National Security, the Public Prosecution, the Abbasiya Hospital and its administration, or the Forensic Medicine Authority. The National Council for Mental Health and the Physicians Syndicate must do their part to reveal the breaches that happened with Ayman, in protection of the lives of citizens as well as the reputation of the profession.

They are still prisoners .. Will the suffering of journalists end after their release?