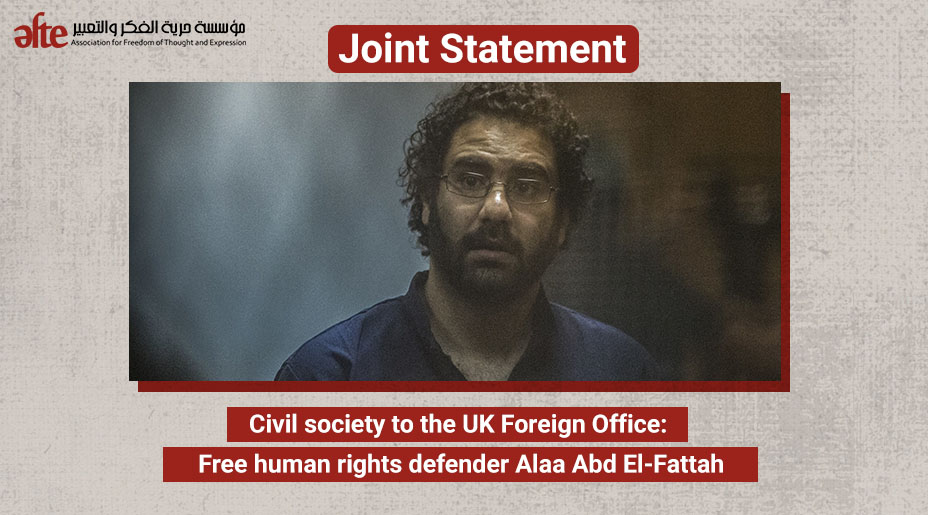 To Secretary of State for Foreign, Commonwealth and Development Affairs of the United Kingdom Elizabeth Truss, and the UK Foreign Office

British-Egyptian activist, blogger, and software developer AlaaAbd El-Fattah — locked up in Egypt to silence his activism — faces the risk of death unless the United Kingdom Foreign Office immediately intervenes for his protection. At the time of writing, 27 May 2022, Alaa has entered day 56 of his hunger strike in protest of the horrific conditions of his imprisonment. His health is rapidly and significantly deteriorating.

On 12 May, 2022, Alaa’s family reported that he was physically assaulted in prison. On 18 May, 2022, 10 Members of Parliament and 17 Members of the House of Lords urged Secretary of State Elizabeth Truss and the UK government to act immediately to secure the activist’s release. On the same day, without informing his family, Alaa was transferred to the new Wadi el-Natrun prison complex. On 19 May, 2022, Alaa’s sister, Mona Seif, confirmed that after the move, her brother “slept on a mattress for the first time in years”. On 26 May, 2022, Alaa’s family confirmed that he received his first books and writing materials in years.

Alaa, now a British-Egyptian dual national, has yet to receive a UK consular visit, has been denied the ability to communicate with his UK lawyers, and is still asking for a judge to investigate the complaints he and his family have filed over his unjust detention. We, the undersigned organisations, urgently call on the UK Foreign Office to secure Alaa’s release and safe transfer to the UK as well as the following:

Alaa has been jailed or charged under every Egyptian government in his lifetime, spending more than 3,000 days behind bars since 2011. He has been unjustly sentenced on unsubstantiated charges which include “spreading false news”, “undermining national security“, “using social media to commit a publishing offence“, and “belonging to a terrorist group”, and has been arbitrarily detained since 2019.

In September 2021, authorities refused to release Alaa even after he surpassed the two-year limit for imprisonment without trial under Egyptian law. Until this point, Alaa had not been informed why he was arrested. “The prosecution hasn’t questioned me about anything in my case for 23 months. And after 23 months, I find out that I am being accused of sharing a news item”, explained Alaa.  Following a trial marred by flagrant fair trial and due process violations, on 20 December, 2021, Alaa was sentenced to five years in prison. Human rights lawyer Mohamed El Baqer and blogger Mohamed “Oxygen” Ibrahim were sentenced alongside him to four years each. In addition, the more than two years that Alaa spent in pre-trial detention did not count toward his current five-year jail sentence meaning that Alaa’s prison sentence will not end until 3 January, 2027.

As a visionary, Alaa was among the first to recognise the power of technology in uniting and mobilising people against unjust and oppressive states. He was consistently working towards connecting technologists across the region. After the 2011 uprisings in Egypt, Alaa managed to gather Egyptian Twitter users in what was known then as “Tweet Nadwa” where they would discuss political issues and use Twitter as a tool to update those who were not able to attend in person. Alaa’s imprisonment is an attempt by the Egyptian government to silence a dissenting voice and discourage those inspired by him.

When the UK granted Alaa citizenship in April, it took responsibility for upholding his rights. The life and fate of AlaaAbd El-Fattah is at stake, and the UK Foreign Office must act now to save his life.