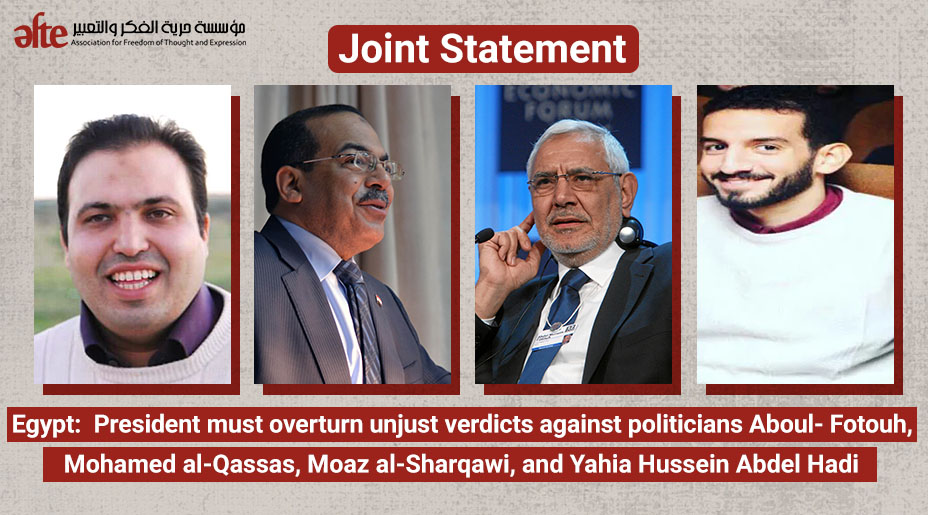 The undersigned organizations condemn the unjust sentences handed down on 29 May by the Emergency State Security Felony Court in Case no. 1059 of 2021 (entered as no. 440 of 2018) against three prominent public opposition figures. Abdel MoneimAboul-Fotouh, president of the opposition party Strong Egypt, was sentenced to 15 years in prison, while his deputy Mohamed al-Qassas, and Moezal-Sharqawi, the former vice-president of the Tanta University Student Union, were both sentenced to 10 years imprisonment. We likewise denounce the four-year prison sentence given to engineer Yahia Hussein Abdel Hadi, co-founder of the Civil Democratic Movement, on charges of spreading false news, on 23 May by the Emergency State Security Misdemeanor Court. We call on Egyptian president Abdel Fattah al-Sisi to decline to ratify these sentences and pardon all four individuals.

The exceptional courts that issued these sentences do not observe the minimum guarantees for a fair trial and their verdicts are not subject to appeal. The verdicts reflect the continuation of the Egyptian state’s policy of retaliation against opposition political figures and rights activists, invalidating its claims about engaging in a national dialogue with all political parties and their representatives. These latest verdicts make a mockery of the National Human Rights Strategy released by the Egyptian government in September and demonstrate the hollowness of its announced lifting of the state of emergency, so long asother repressive laws continue to be used to wrongfully imprison.

The verdicts are the latest in a series of escalating rights violationsagainstAboulFotouh and al-Qassas, who have been detained since February 2018, in the wake of the Egyptian government’s security crackdown on the opposition shortly before presidential elections. AboulFotouh was arrested just days after expressing opinions critical of the Sisi government in televised interviews with the BBC, Al Jazeera, and al-Araby. Mohamed al-Qassas has been charged in a series of cases, in a process known as “recycling,” allon thebasisof highly biased investigations. The charges and accusations are typically falsified and defy logic; for instance,  AboulFotouhwas accused of  organizing meetings while he was being held in solitary confinement. Both AboulFotouh and al-Qassas have been held in pretrial detention beyond the legal two-year legal limit, and they were added to the state’s terrorism lists by the Court of Cassation earlier this year.

AboulFotouhrecently suffered several severe cardiac episodes that require urgent medical attention. The most recent episode, according to his family, took place on 23 March after prison guards attacked him in retaliation for his requestto file an official compliant about the Tora prison administration’srestrictions on  visitation. AboulFotouhalso suffers from an enlarged prostate, diabetes, nerve pain, and a slipped disc resulting from a fall in the police truck while he was being transported for interrogation.

In addition to engaging in willful medical neglect, the prison administration has held AboulFotouh and al-Qassas in total isolation in cells with poor ventilation despite the high temperatures.The authorities have denied them books, newspapers, and radios, while reducing their exercise time, and only allow prison visits to be conducted behind a glass barrier using a telephone.

Exceptional or emergency courts in Egypt have a propensity for reaching verdicts on dubious charges revolving around the “crime” of exercising one’s fundamental rights, such as freedom of expression. Lawyer and former parliamentarianZyadElelaimyand pro-democracy activistAlaa Abdel Fattahwere sentenced to five years in prison; while four-year prison sentences were given

The effectiveness of any national dialogue is contingent on guarantees of the right to freely express critical and dissenting opinions, the cessation of reprisals and abuse against such critics, and an end to the years-long imprisonment of numerous peaceful dissidents, including  politicians, and rights defenders, whoare wasting away in prison as they are denied medical care, simply because they expressed opposition to the policies and practices of the Sisi government. The undersigned reiterate their condemnation and rejection of the unjust verdicts issued by the exceptional courts. We demand an end to the Egyptian state’s policy of imprisoning peaceful dissidents for exercising their fundamental rights and call for the immediate release of all those unjustly imprisoned, while holding the authorities responsible for their lives and physical and mental health.