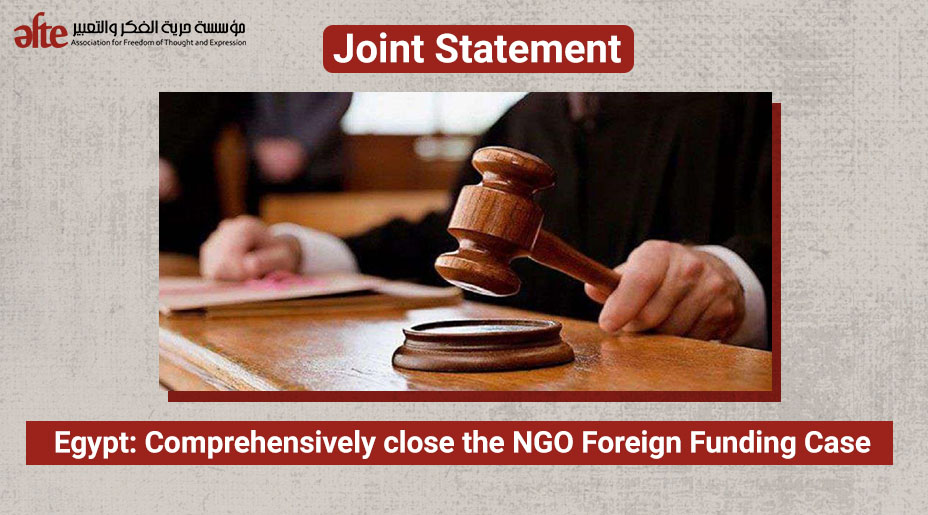 The undersigned human rights organizations demand a genuine and comprehensive closure of Case no. 173 of 2011, known as the “NGO Foreign Funding Case”, and all the consequent decisions that have deprived a number of advocates of their rights for over a decade, including by freezing their assets and banning them from travel. The case emanated from a decision of the Cabinet of Egypt, which delegated to the Minister of Justice the formation of a fact-finding committee on foreign funding of civil society organizations, 11 years ago. Despite decisions issued to halt investigations against several organizations and to remove some of their staff from travel ban list, the majority of advocates accused in Case 173 remain unduly deprived of their fundamental rights. 32 human rights defenders had been placed on the travel ban list, and at least 22 of them are still banned from travel, including a number of those for whom investigations have been closed. The deliberate stalling, obstruction, and evasion in regards to these procedures is indicative of the Egyptian state authorities’ lack of genuine intention and political will to close this case. The limited displays of progress are simply cosmetic with the intent of showcasing the Egyptian government –in view of the international community- as an initiator of reform and political progress.

The Egyptian government has relentlessly deployed a wide range of practices to suppress the human rights movement in Egypt; among them the eleven-year long NGO Foreign Funding Case, and extralegal measures including media smear campaigns against human rights defenders spearheaded by state security owned or aligned outlets, the summoning of human rights organizations’ staff to state security headquarters, and the arrest and prosecution of human rights defenders on the basis of patently fabricated terrorism charges. State repression has escalated to such a severe extent that human rights organizations and advocates are currently facing draconian sentences from extraordinary courts that cannot be appealed.

In December 2021, the Emergency State Security Court, an extraordinary court, issued a four-year prison sentence against human rights defender Mohamed El-Baqer, and placed him on the terrorist list. Human rights defender Ibrahim Metwally, founder and co-ordinator of the Association for the Families of the Disappeared, has been illegally deprived of his freedom without due process,  under continued pre-trial detention for nearly half a decade, simply due to his cooperation with United Nations mechanisms; human rights lawyers Haitham Mohammedein and Amr Imam are also arbitrarily imprisoned. Bahey eldin Hassan, director of the Cairo Institute for Human Rights Studies (CIHRS) was sentenced to 18 years in prison on the basis of two verdicts issued in absentia. The directors of the Egyptian Initiative for Personal Rights have been targeted by state security, preventing them from traveling and depriving them of access to their assets.

In an attempt to impose more restrictions on human rights organizations and cripple their ability to work, Law no. 149 of 2019 on Civic Associations was issued. The Law on Civic Associations grants the Ministry of Social Solidarity the right to obstruct the work of registered civil society organizations, encroach on their independence, and prevent them from monitoring human rights violations and holding those responsible for violations to account. The issuance of this law compelled the Arabic Network for Human Rights Information (ANHRI) to announce the suspension of its activities after 18 years of defending freedom of opinion and expression in Egypt.

The undersigned human rights organizations affirm that the genuine and comprehensive closure of Case no. 173 must be followed by tangible improvement and progress in the Egyptian government’s approach towards civil society and human rights organizations. Egyptian authorities must end the practice of “recycling cases”, which occurs when a new case is brought by against someone who has served or is still serving a previous sentence, under the same or similar charges as the previous sentence. This illegitimate practice is deployed with the intent of political retaliation against human rights defenders and intimidating others from engaging in human rights advocacy, Bahey eldin Hassan and Hossam Bahgat are just two among many who have been ensnared unjustly in the legal system as a result.

The Egyptian government and all state-affiliated authorities must take genuine and measurable action to end their malicious and illegal campaign of retribution, intimidation, and defamation against human rights defenders; foremost by immediately releasing all human rights defenders detained on the basis their human rights activism in conjunction with the categorical and unconditional closure of Case 173 of 2011, which requires the restoration of the rights of all who remain under travel ban and deprived of their assets, and are at high risk of prolonged imprisonment.