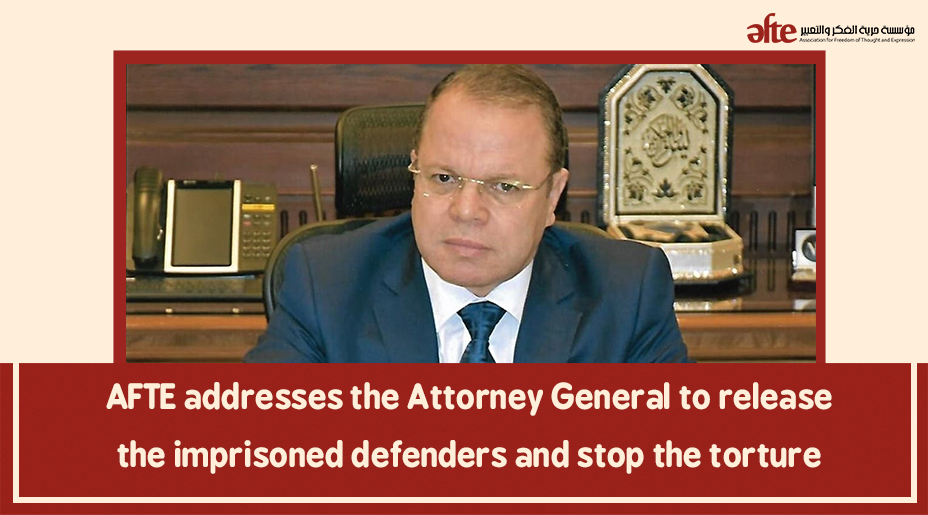 AFTE addresses the Attorney General to release the imprisoned defenders and stop the torture.

Human rights defenders in Egypt are subjected to numerous violations, most of which can be described as grave, as a punishment for their continuing -despite all restrictions and obstacles- to practice their work to stop human rights violations in Egypt and support the victims of those violations.

The violations committed against human rights defenders varied, and the authorities responsible for them varied. As the security and judicial prosecutions continued – without interruption – throughout the past decade. Among the defenders’ exposure:

Raids, arrest, enforced disappearances, torture, and physical assault, in addition to detention in violation of the law, recycling and custody in more than lawsuit at the same time, in addition to the orders to be included on the terrorist lists, including the procedures of freezing funds and banning travel.

Based on those as mentioned above, AFTE calls on Counselor Hamada El-Sawy, the Egyptian Attorney General, to quickly take all necessary measures to release all human rights defenders who are being held in pretrial detention pending investigations in multiple lawsuits due to the practice of their work in defending human rights and supporting victims of violations by the authorities for those rights. In addition to discontinue investigations into these lawsuits, and until that is done, AFTE stresses the need to stop the violations against imprisoned defenders immediately and to hold accountable all those involved in the practice of these violations.

As AFTE calls for a review of travel ban orders for human rights defenders, the association monitored at least 26 travel bans for defenders for long periods, making the order punishment in itself.

Attached to you’re a list of defenders who are being held in pretrial detention pending lawsuits related to their human rights work. The lists include lawsuits numbers, charges, lengths of imprisonment, and the context of the arrest of each person on the lists.