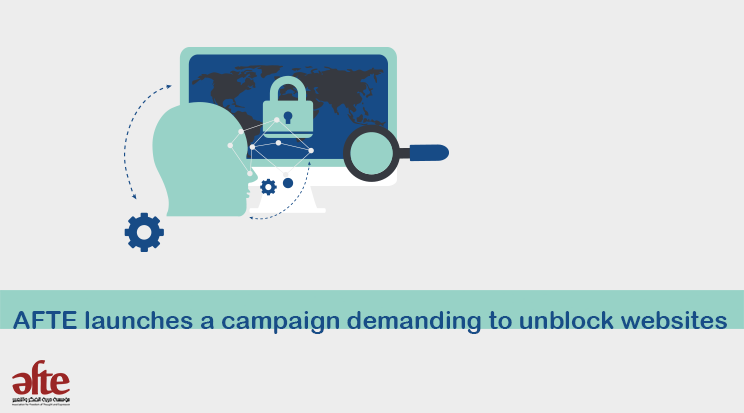 After more than three years of the massive blocking campaign that the Egyptian authorities started in Egypt (May 2017), the Association for Freedom of Thought and Expression (AFTE) is launching, today, a campaign demanding to unblock websites, especially independent press websites.  Although Internet censorship practices have increased over the past three years, the impact of these practices is most evident during the crisis of the novel corona virus. Blocking of websites limits the ability of Internet users in Egypt to access information. Such information would enable them to deal properly with the crisis, and contribute to reducing the panic caused by the Covid-19 crisis.

According to the monitoring carried out by AFTE, the number of news/media websites that have been blocked in Egypt has reached at least 127 websites, out of a total of at least 549 blocked websites, since the Egyptian authorities began expanding their blocking practices in 2017.

The Covid-19 crisis has demonstrated how important access to information is, especially given the lack of official information and data available to citizens, as well as citizens’ lack of confidence in its credibility. In such circumstances, independent press sources become the primary refuge for citizens looking for the truth of what is happening, whether in terms of health policies or other social and economic impacts.

The blocking also extends to hundreds of websites, including those affiliated with local and international human rights organizations, as well as websites that enable users to bypass blocking (proxy and VPN), which increases the magnitude of the crisis of the lack of sources of information.

AFTE believes that the Egyptian government violates, by its practice of blocking websites, the provisions of the Egyptian constitution and the International Covenant on Civil and Political Rights, which guarantee freedom of expression and freedom to circulate, receive and access information. Moreover, despite the issuance of repressive laws that allow the Egyptian authorities to exercise blocking of press/media websites, the blocked websites were not blocked based on these laws, with the exception of 44 websites that were blocked by a decision of the Inventory, Seizure and Management Committee of Muslim Brotherhood Funds, or by a decision of the Supreme Council for Media Regulation. In addition, the contexts associated with blocking press/media websites have shown that blocking is often due to editorial policies that support democratization and human rights.

The campaign launched by AFTE includes the publication of a study entitled “Out of sight: A study on the effects of three years of blocking news websites”. The study provides monitoring and analysis of the effects of blocking on press websites within three years, based on interviews with editors-in-chief and senior journalists at four independent press websites that were blocked.

The study shows that the impact of blocking extended to the press content produced by the websites in terms of quantity and quality. On the one hand the blocked media platforms feared that they would be subjected to more than the blocking. On the other hand, the media websites that were not subject to blocking were afraid of being blocked, if they cross the red lines related to criticizing the Egyptian authorities or publish information that the Egyptian authorities do not want to publicize. Consequently, the blocking has caused censorship to increase significantly within the press outlets, in addition to the increased practice of self censorship by journalists themselves.

In the context of campaign activities, AFTE publishes an update to the Tor Browser usage manual to bypass Internet censorship. Tor helps the Internet user protect his privacy and security on the Internet by hiding his digital identity and encrypting Internet connectivity, and enables users to access blocked websites. AFTE hopes that the use of Tor Browser will enable Internet users to access independent press websites and obtain objective information on developments in the Covid-19 crisis in Egypt.

AFTE also publishes an update of the list of blocked websites in Egypt. The association began preparing this list and updating it periodically since 2017. Over a period of three years, AFTE has sought through the list, to understand and follow up the authorities’ practice of Internet censorship.

AFTE plans to organize a webinar with a group of editors-in-chief and senior journalists in the independent press websites which have been blocked, with the aim of discussing the impact of blocking on these websites, after more than three years since the Egyptian authorities expanded this practice. The webinar will also address what these press outlets have done to continue delivering information to their readers after their platforms were blocked.

AFTE calls on the Egyptian government to unblock websites, particularly press/media websites. The association also seeks, through its campaign, to renew the public debate over internet censorship and its highly negative effects on the state of the independent digital press in Egypt.