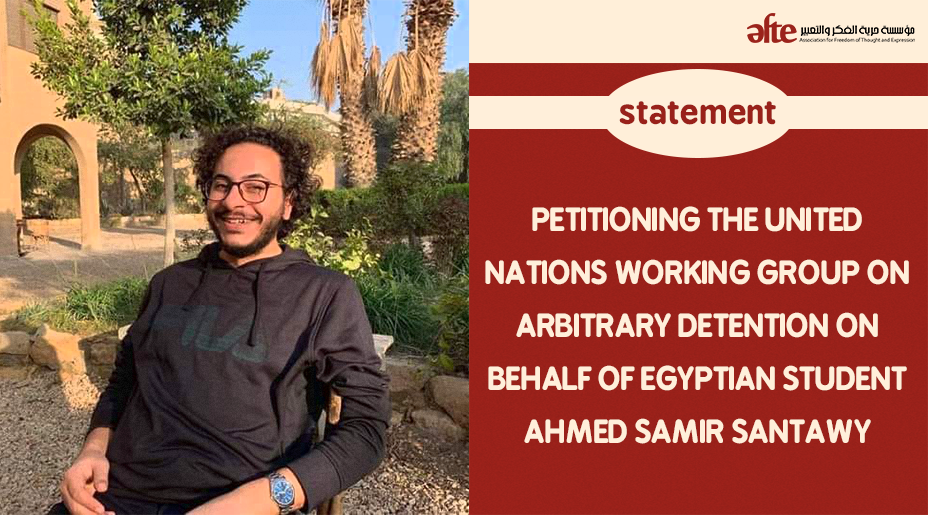 On June 15, 2021, the Association for Freedom of Thought and Expression and Robert F. Kennedy Human Rights jointly filed a petition before the United Nations Working Group on Arbitrary Detention (UNWGAD) on behalf of Ahmed Samir Santawy, a 29-year-old Egyptian citizen and graduate student of the Central European University. Mr. Santawy was arrested by Egyptian authorities during a visit to Egypt and has been detained since February 1, 2021 on alleged terrorism charges with limited access to his family and lawyers.

Mr. Santawy, whose academic research and writing focuses on sexual and reproductive rights in Egypt, has been targeted by Egyptian authorities since the start of his graduate studies. He was regularly stopped and interrogated about his studies by airport police while departing from or returning to Egypt. On January 23, while Mr. Santawy was on a trip outside Cairo, multiple armed National Security Agency (NSA) agents raided his family home. Without a warrant or any explanation, the agents searched the house confisticating the property of the Santawys’ including a surveillance camera. Given his absence, the NSA agents left instructions for Mr. Santawy to present himself to the police station once he returned to Cairo. On January 30, he complied with the NSA summons and was asked to return on February 1. On his return, the NSA detained Mr. Santawy for five days without access to his family or lawyers. In the period when he was held incommunicado, Mr. Santawy was blindfolded and assaulted by the NSA agents. The authorities have denied Mr. Santawy the facilities to consult with his lawyers privately since his detention.

Since February 17, Mr. Santawy’s detention order has been renewed 10 times and the authorities have included him in two cases on similar baseless terrorism-related allegations. Through a controversial process of “rotation,” the authorities included Mr. Santawy into the second case without concluding investigation into the first case. On June 1, the second case was referred to trial before the State Security Emergency Misdemeanour Court (The First Settlement).

“Egypt continues to weaponize pretrial detention and its counter terrorism laws to intimidate and punish independent voices in the country,” said Ikechukwu Uzoma, staff attorney at Robert F. Kennedy Human Rights. “Allies of Egypt, including the United States, must intensify pressure on President Al Sisi to ensure respect for human rights and the rule of law.”

Mr. Santawy is one of many academics that have been targeted and arbitrarily detained by the Egyptian authorities. In 2016, Walid Salem, a doctoral researcher from the University of Washington, was arrested and detained for eight months because of his research on the Egyptian judicial system. Patrick George Zaki is another academic from the University of Bologna in Italy currently detained in Egypt. Mr. Zaki, was detained upon arrival at Cairo International Airport by the NSA and interrogated about his human rights work. He was later transported to an undisclosed location where he was tortured. Other academics have been arrested and held in pretrial detention for their academic and political work and some have been murdered while visiting or working in Egypt.

“The Egyptian academic community faces continuous threats from security agencies. The Egyptian government must stop the intervention of security agencies in academic work as that’s the only way for Egypt to respect its international human rights obligations,” said Mohamed Abd El-Salam, executive director at Association for Freedom of Thought and Expression.

The petition urges the UNWGAD to find that Mr. Santawy’s detention is arbitrary because he was arrested and detained without proper legal justification; because his detention resulted from the exercise of his right to freedom of opinion and expression; because the government continues to deny his due process rights required under international law; and because he was targeted by the government on account of his academic research on sexual and reproductive rights.