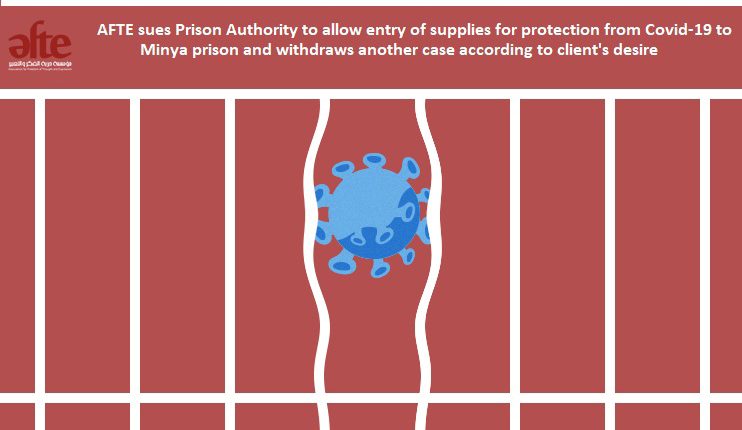 The Association for Freedom of Thought and Expression (AFTE), filed a lawsuit before the Administrative Court on behalf of Mahmoud Shehata, student at Cairo University, demanding that the Ministry of Interior, represented in the Prison Authority, allow Shehata’s family to provide him with health supplies and hygiene tools such as alcohol disinfectants, masks, and gloves that contribute to the prevention of corona virus infection (Covid-19). The lawsuit also demanded that his family be informed of all information and preventive measures that the Prison Authority and the Ministry of Interior are taking to prevent the spread of Covid-19 virus infection within prisons and to enable Shehata to communicate with his family by any means, instead of the canceled weekly family visits.

Shehata was sentenced to 7 years imprisonment on charges of assembly and show of force at Cairo University, in case No. 26123 of 2014, Bulaq El Dakrour Felonies, registered with No. 3235 of 2015, south of Giza. He is imprisoned in the high security Minya prison.

The lawsuit, which numbered 37755 for the year 74 Judicial, was raised against the Prime Minister, the Minister of Interior, and the Head of the Prison Authority, in their capacity.

This lawsuit is part of a campaign launched by AFTE to highlight and improve the conditions of prisoners and detainees pending freedom of expression cases, amidst the spread of Covid -19 virus.

In the lawsuit, Shehata’s defense committee’s demands were based on three main elements; the first is the law and the constitution, as the latter stated that imprisonment should be in appropriate places, in the humane and health terms. In addition, all that contradicts human dignity or endangers the prisoners’ health is prohibited in prisons. The Prison Regulation Act also provides that:

“Every convict shall have the right to correspond, and make telephone calls in exchange for a fee, and his family has the right to visit him bimonthly, all under the supervision of the prison administration and in accordance with the rules and procedures established by the internal regulation. A remand prisoner has this right unless a different decision is issued by the competent public prosecutor or the competent investigating judge, in accordance with the procedures established by the internal regulation”.

The second element on which the lawsuit was based is the United Nations Standard Minimum Rules for the Treatment of Prisoners, as these rules emphasized that prisoners must enjoy the same level of health care available in society, and should have the right to obtain the necessary health services free of charge and without discrimination based on their legal status.

The lawsuit also referred to the “Interim Guidance” issued by the World Health Organization with the Office of the High Commissioner for Human Rights, on March 27, 2020, for governments and countries concerning people deprived of their liberty in light of the outbreak of the Covid-19 epidemic. The “Interim Guidance” stated that the situation may require, in light of the spread of Covid-19, replacing family visits with other measures, such as video, electronic communications and telephone communications (paid phones or cell phones). It also pointed to the importance of transparency with regard to the preventive measures taken by prisons, as it stated:

“Information on preventive health measures should be provided to all persons deprived of their liberty in a language and format they understand and that is accessible; and efforts should be made to improve the hygiene and the cleanliness of the detention places. Such measures should be gender, culture, abilities and age sensitive”.

In relation to the mitigating measures, the “Interim Guidance” stated that:

The third element on which the lawsuit was based is the abuse of power by the administration –in this case the Prison Authority- which alone took over all the powers, in a complete disregard of all the fundamental rights and freedoms of convicts and remand prisoners. It also did not apply any of the constitutional articles or the legal provisions of the Prison Regulation Act, with regard to the right to communicate with the detainee and the prisoner.

In a related context, AFTE decided to withdraw a case that it had filed last week before the State Council, on behalf of journalist Hassan El-Banna Mubarak, to demand that his family be allowed to provide him with health supplies and hygiene tools such as alcohol disinfectants, masks and gloves. The lawsuit also demanded that El-Banna be enabled to communicate with his family through telephone calls and written messages, in addition to informing his family of all the preventive measures that the prison administration took to prevent the spread of Covid-19 virus infection.

The decision to withdraw the lawsuit is based on a prolonged discussion with El-Banna’s family on the appropriate legal steps to his advantage, as it became evident that the family is inclined to withdraw the lawsuit. The association’s position is consistent with its established principles of prioritizing the desire of the clients and their families.

For the full text of the lawsuit:

View IASC Interim Guidance on COVID-19: Focus on Persons Deprived of Their Liberty (developed by OHCHR and WHO)

Position Paper: On the Creation of the State Ministry of Information

Dismissing the Appeal of Defendants of Shooting Club Case and…