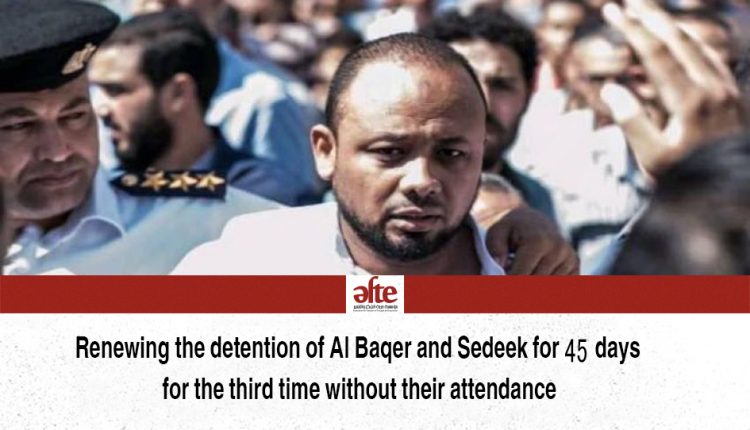 Yesterday, the Criminal Court (Fifth circuit/Terrorism) decided to renew the detention of lawyers, Mohamed Al-Baqer and Hamed Sedeek, for 45 days pending investigations into case No. 1356 of 2019, Supreme State Security. This is their third renewal of detention without their attendance from Tora Maximum Security Prison 2, and their fourth renewal of detention session, as one of the sessions was postponed.

The last session that Al-Baqer and Sedeek attended was on February 20, 2020, and since then they have not attended any of the renewal of detention sessions; they also did not have any communication with their lawyers. During this period, Al-Baqer sent only one letter from his prison, while Sedeek did not send any letters.

The prosecution accused Al-Baqer and Sedeek with several accusations, among them, “joining a terrorist group knowing its objectives, financing that terrorist group, publishing and broadcasting false news and information, and misusing a social media account for the purpose of committing the crime of spreading false news.”

The pandemic hasn’t stopped repression: An outlook on how the Egyptian state…

A security force raids the headquarters of “Almanassa” and…