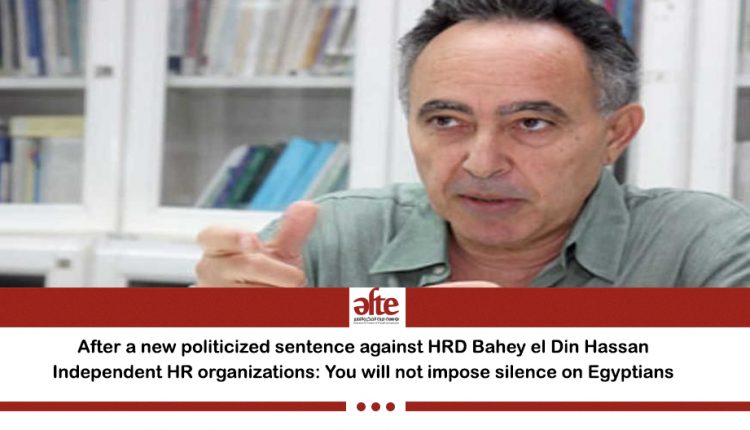 After a new politicized sentence against HRD Bahey el Din Hassan.. Independent HR organizations: You will not impose silence on Egyptians

The verdict issued yesterday, based on the so-called Anti-Information Crime Law, which is one of the anti-constitutional laws that is stigmatized with notoriety, and from a judicial department specialized in terrorism cases, against the background of criticism contained in a few short posts on the social network “Twitter” clearly reveals the use of these laws to violate citizens’ rights, the opposition and human rights defenders in order to settle scores and imprison every critic, opponent, or person exposing the brutal violations that have accompanied the policy of impunity in Egypt since the dispersal of the Rabaa Al-Adawiya massacre, until the use of pretrial detention as a punishment.

The signatory human rights institutions also announce their extreme surprise, that while thousands of pretrial detainees are prevented from appearing before the investigation authorities and the courts to consider renewing their detention order and their imprisonment is renewed on paper, a trial is held and a decision is issued with a very harsh sentence due to a few tweets against a human rights defender, who has himself been subject to death threats and incitement to kill him, sendinga message, loud and clear, regarding the double standards of Egypt’s justice system.

Independent human rights organizations confirm once again that the message has arrived, but they will not remain silent and will not be complicit in human rights violations and the robbing of the freedoms of Egyptians and the incarceration of hundreds and thousands of prisoners of conscience into prisons, and that there is no alternative to respecting the rule of law, putting an end to the breach of the values of justice and holding accountable everyone who commits a crime, regardless of their position, and that the monitoring and documentation of these crimes will not stop, no matter how much the repression and the imposition of silence, and any violator of the law and human rights will not go unpunished.