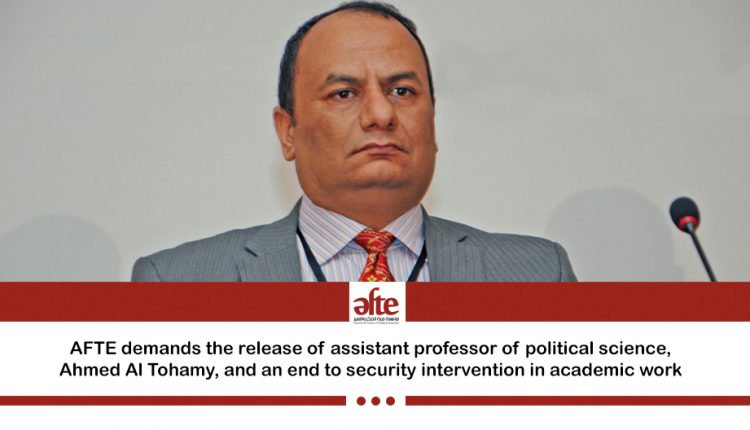 The Association for Freedom of Thought and Expression (AFTE) calls on the Public Prosecution to speed up the release of Dr. Ahmed Al Tohamy Abdel-Hay, Assistant Professor of Political Science at the Faculty of Economic Studies and Political Science at Alexandria University. AFTE considers that Al Tohamy’s imprisonment comes within the security services’ interference in academic work, as a number of professors and researchers have been subjected to pretrial detention as a result of such meddling. AFTE calls on the Egyptian authorities to stop security intervention in academic work.

Al Tohamy was arrested on July 3, 2020. He remained under enforced disappearance at the headquarters of the National Security in Cairo for 17 days, until he was brought before the prosecution on June 20. The prosecution ordered his imprisonment pending the Supreme State Security Case 649/2020. He was charged with joining a terrorist group, spreading false news and statements, and misusing social media.

The prosecution’s investigation with Al Tohamy focused on accusations of his collaboration with the Egyptian activist Muhammad Sultan, residing in the United States, in the lawsuit he filed against the former Prime Minister Hazem Al-Beblawy. Close relations to Al Tohamy have denied that.

Al Tohamy has suffered from poor detention conditions since his arrest. He is held in a detention room with 30 people and is denied exercise. He was also denied visits by his family until last October.

The Supreme State Security Prosecution renewed Al Tohamy’s detention, without his presence at the prosecution office or enabling him to communicate with his lawyer.

Ahmed Al Tohamy has been working as an assistant professor of political science at the Faculty of Economic Studies and Political Science at Alexandria University since 2014. He previously worked as a researcher and then a professor at the National Institute for Social and Criminal Research in Cairo from 2000 until 2014 and as a researcher at the Al-Ahram Center for Political and Strategic Studies from 1996 to 2000. In 2019 he was a visiting professor at the Free University of Berlin. Al Tohamy has published many writings in scientific periodicals.

AFTE stresses the need for the Public Prosecution Office to move the release of Ahmed Al Tohamy and enable him to return to his academic work, as the charges pressed against him are not based on any evidence. AFTE also extends its call for the release of all academics held in pretrial detention, whether for practicing their work or expressing their critical views of some public policies.