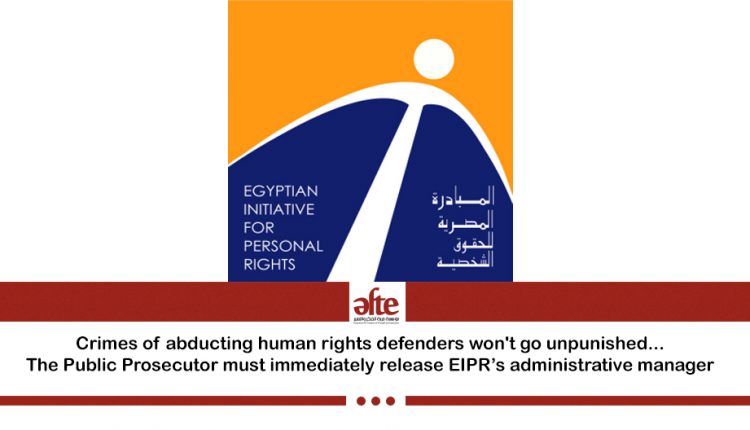 The undersigned human rights organizations said today that the Egyptian security services’ ongoing crimes of kidnapping human rights defenders and fabricating cases and charges against them, the last of which is the arrest of Mohamed Bashseer, the Administrative Manager of the Egyptian Initiative for Personal Rights (EIPR), will not go unpunished, no matter what the position or role of their perpetrators.

As it usually does, the National Security Agency stormed the house of Mohamed Bashseer, the Administrative Manager at EIPR at dawn yesterday (Sunday), in a flagrant violation of the Constitution’s provisions; as he was prevented from making a phone call to his family or lawyer. Also, the State Security Prosecution’s investigative reports didn’t mention or disclose the reasons for his detention as stipulated by the Constitution.

The Egyptian human rights organizations also express their extreme astonishment and denunciation to the State Security Prosecution pressing against Bashseer the same common trumped-up accusations, which are:  “joining a terrorist group, using the internet to spread false information that undermines public security, and committing one of the crimes of funding terrorism”.

Basheer has been added to the Case No. 855 of 2020, not only without facing him with any evidence or legal presumption of the validity of such accusations- which the National Security Agency used to fabricate against human rights defenders, journalists, and democracy advocates- but also, and according to the course of investigations, Basheer has been arrested and detained because of EIPR’s work in defending human rights; especially that a number of European ambassadors accredited to Egypt have lately paid a visit to EIPR’s headquarters to learn about its activities and make discussions about various human rights issues. Adding to the farce, the latest visit paid by the high-ranking European Union for Human Rights to Egypt indicates their complicity in the violations committed by the Egyptian government in the human rights field and was considered as a green light to expand such violations. All the aforementioned points reveal the political nature of the fabricated case in which Mohamed Basheer is involved as well as the Egyptian government’s severe antagonism towards human rights and independent institutions. And unfortunately, the performance of the State Security Prosecution also represents an indicator to its continued complicity and involvement in the abuse and crackdown practiced against human rights defenders. In other words, this is not the first incident where the State Security Prosecution orders the incarceration of human rights activists-despite the fact that they didn’t violate the law- after carrying out unfair investigations that are filled with questions about their personal beliefs and viewpoints and not about violating law or committing any crimes. Such human rights activist include Mahienour Al-Masry, Mohamed Ramadan, Amr Imam, Mohamed Al-Baqer, Zyiad Al-Eliemi and many others whose sole crime is represented in voicing their opinion as well as their professional and legal activity that angers and displeases the authorities.

Mohamed Basheer, 54, has been working as the Administrative Manager at the Egyptian Initiative for Personal Rights (EIPR) for nearly seven years. He is still astonished and traumatized by his detention order since he never violated the law or committed any illegal action or activity to be added to the list of thousands of innocent prisoners of conscience in Egypt, who stand behind bars based on mostly fabricated and unfair investigations conducted by the State Security Prosecution.

The undersigned independent human rights organizations affirm that such police methods represented in the fabrication of cases against innocent people and defenders of human rights and democracy will not continue, adding that they are reporting and documenting such crimes to ensure that none of their perpetrators will go unpunished. The organizations calls on the Public Prosecutor to immediately release Mohamed Basheer, along with all those detained not only in connection with the fabricated Case No. 855 of 2020 but also all the political cases fabricated by the security services against human rights defenders and journalists. They also demand to put an end to the approach practiced by the State Security Prosecution in incarcerating many innocents based on the investigative reports conducted by the National Security Agency officers, and to enforce the law and respect the Constitution.

Al-Nadeem Center for Rehabilitation of Victims of Violence and Torture