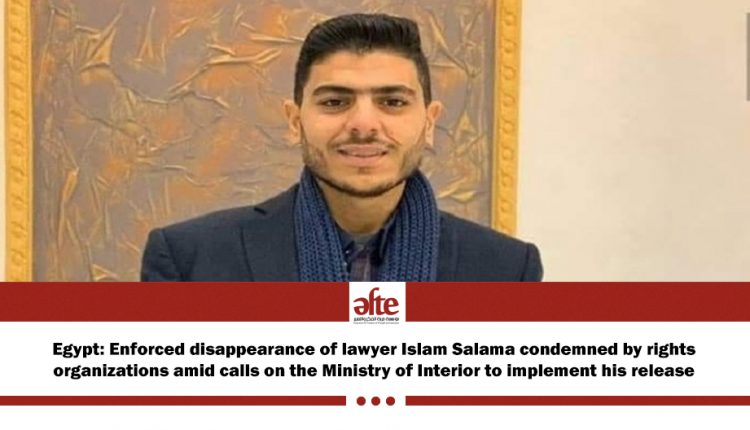 Egypt: Enforced disappearance of lawyer Islam Salama condemned by rights organizations amid calls on the Ministry of Interior to implement his release

The undersigned human rights organizations are deeply concerned by the Egyptian government’s constant abuse of lawyer Islam Salama, who has been forcibly disappeared for the third consecutive time, following earlier verdicts by criminal courts in Cairo and Mahalla ordering his release. The organizations hold the Egyptian government authorities responsible for his health and life.

On May 25, 2020 security forces arrested Islam Salama from his home in the town of Zefta in the Gharbia Governorate. Salama was arbitrarily detained without legal basis in an undisclosed location for ten days before he was brought before the Supreme State Security Prosecution on June 6, 2020. The prosecution ordered his imprisonment pending case no. 1375 of 2018 State Security, over charges of joining a terrorist group. On October 14, he was ordered to be released on parole by Cairo’s Fifth Circuit Terrorism Court . Yet after Salama’s transfer to the police station on October 19 to complete the parole proceedings, neither his family nor his lawyers were able to contact him. Instead of being released, Salama was forcibly disappeared a second time.

Islam Salama’s whereabouts remained unknown by his lawyers and family for 45 days until he reappeared before the prosecution on November 30, 2020, pending a new case, no. 7869 of 2020, leading to his remand in custody. On January 16, 2021, the Mahalla Criminal Court ordered his release on bail of 2,000 EGP. Salama’s family was shocked to learn that despite the bail being paid and the procedures completed, he was forcibly disappeared yet again, for a third time. The authorities continue to deny knowledge of his whereabouts.

Salama’s defense team filed a petition to the Public Prosecutor calling for an urgent investigation into the failure to implement the court’s verdict to release him. It also called for the disclosure of Salama’s detention location and for his lawyers to be allowed to communicate with him. His family submitted a similar appeal to the National Council for Human Rights.

The sustained harassment of lawyer Islam Salama is not uncommon in Egypt; it is part of a broader and deliberate retaliatory campaign by the government targeting lawyers for their legitimate work in defending rights and freedoms.   Lawyers in Egypt are at high risk of enforced disappearance, arbitrary arrest, and prolonged detention resulting from the ‘recycling‘ of previous cases against them.

Human rights lawyer Mahienour El-Massry was previously arrested while leaving the State Security Prosecution building; she was charged in another recycled case, no. 488 of 2019, and re-charged in a new case, no. 855 of 2020. Similarly, human rights lawyer Mohamed El-Baqer was included in case no. 1356 of 2019 and then in case no. 855 of 2020, along with lawyers Amr Imam, Ezzat Ghoneim and Ibrahim Metwally Hegazy, who were subjected to an array of abuses in retaliation for their work as rights lawyers.

The signatory organizations renew their calls for the prompt disclosure of lawyer Islam Salama’s whereabouts, for his family and lawyers to be enabled to communicate with him, and for his release to be immediately implemented by the Ministry of Interior in fulfilment of the Mahalla Criminal Court’s verdict. The organizations further call for an end to the Egyptian government’s ongoing reprisals against lawyers and the provision of a safe environment suitable for their work, and for the release of all those unjustifiably detained on the basis of their legitimate and peaceful practice of the legal profession.

Renewing the detention of the Quranist Blogger Reda Abdel-Rahman for…

A Fact-Finding Committee reports on sexual assaults and administrative…

Renewing the detention of Doctor Ahmed AlTomahy AbdelHay for 45 days…

Renewing the detention of researcher “Ahmed Samir” for 15 days pending…