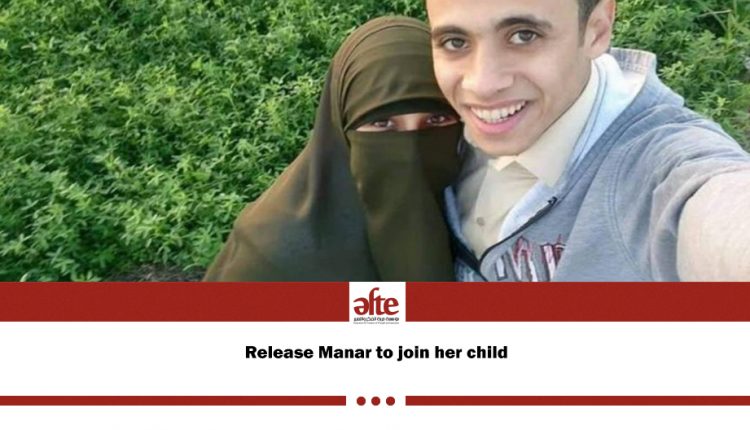 On the 9th of March 2019 a family was abducted by security forces from their home in Alexandria. The family included the father Omar Abdel Hamid Abu Elnaga, the mother Manar Adel Abu Elnaga, 27 years, assistant lecturer in Mathematics, Tanta university, Gharbia governorate and their 1-year-old baby El Bara’a Omar Abdel Hamid Abu El Naga. For 23 months nothing was heard or known of their whereabouts.

On the 20th of February 2021, Manar appeared again with her child, now almost three years old, appeared in state security prosecution, charged, as is the habit of the prosecution over recent years, of joining and funding a terrorist organization, without specifying the nature of that organization in state security case no. 970/2020. According to the security report Manar has allegedly been arrested on the 17th of February 2020 and not the 9th of March 2019, another customary behavior of security authority and the prosecution to cover up for the period of disappearance.

After the interrogation, Manar was taken to Qanater women prison to start her pre-trial detention which could take her over months and years of detention without trial and with automatic renewal of her detention order, 10 times for 15 days and then indefinitely for 45 days. Because her child has in the meantime become 3 years old, he was separated from his mother. Children can remain in prison with their mother as long as they are younger than two years. Observers reported that the child panicked when he was separated from his mother – now residing with his maternal aunt, crying that he wants to go back to the “room” where he was probably held with his mother for those two years.

On the 21st of February, Manar’s brother posted the following on his personal Facebook page:

“I wonder. Are we meant to feel happy about the return of El Bara’a to us after two years of forced disappearance? Or to feel sad for the situation we are in: a child who does not recognize his family, afraid of them, screaming that he wants to return to the “room”. I want my mother. A child who is not responding to normal people after living for two years with people in uniform. And if we are to feel sad, should we feel sad for the psychological trauma this child has suffered for two years, may god help us in treating him? Or feel sad for the mother who was threatened by the prosecution to disappear again if she did not say that she was arrested only 2 days ago (although we have a court order, from two years ago, against the ministry of interior to disclose her whereabouts? Or for the father of who did not appear till now and of whom we have no information? I need someone to answer me. Our only solace is in God.” (http://tiny.cc/s1iotz)

The undersigned organizations demand the immediate release of Manar Abu el Naga and her return to her child in a safe family environment where both could receive the psychological help they need after the extraordinary trauma of disappearance for two years. We also demand the disclosure of the whereabouts of the husband and father, Omar Abu El Naga, of whom nothing is yet known and we express our fears for his safety.

El Nadim Center for Rehabilitation of victims of violence and torture

Renewing the Detention of Dentist “Waleed Shawky” for 45 Days

AFTE and ANHRI appeal against the refusal to grant Dr. Manar Al-Tantawi her…