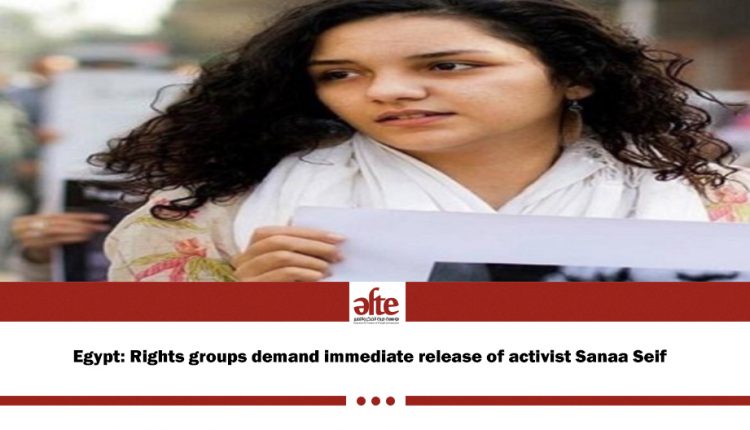 In conjunction with the trial session of the Egyptian activist Sanaa Seif al-Islam, the undersigned human rights organizations demand her immediate release, and holding investigations into all the complaints lodged by her family, which have so far been overlooked.

The signatory organizations believe that Seif’s demand for her right to communicate with her brother, the political activist Alaa Abdel-Fattah, has been perceived as a full-fledged crime by Egyptian authorities. As a result, she and her mother were assaulted, and she was detained and referred to trial on the basis of trumped-up charges. Legally, however, it is those who kidnapped her and falsified charges against her who should be prosecuted for their crime.

The case dates back to 23 June, 2020, when officers in plainclothes kidnapped Seif in front of the Public Prosecutor’s office while she was trying to lodge a complaint with the prosecutor in relation to an attack by a group of women – most likely paid by the prison administration – that targeted her and her mother, Dr Laila Soueif in front of the Tora prisons area, where her brother is being held. The assault took place when the activist and her mother attempted to stage a sit-in in front of the prison gates after they were barred from visiting Abdelfattah or even communicating with him in writing.

Seif was then kidnapped in a microbus without license plates, and transported to the headquarters of the Supreme State Security Prosecution, where she faced an investigation into multiple charges according to an investigation memorandum prepared by the National Security Apparatus. The prosecution then ordered her pre-trial detention pending Case No. 12499 of 2020, which is registered under No. 659 of 2020/Supreme State Security. Two months after her detention, the case was referred to the Criminal Court. The proceedings of the trial began on 12 September, 2020. Seif faces charges of publishing and broadcasting false news, and insulting a civil servant on her Facebook page.

The organizations reiterate that the case has been marred by clear and documented violations, including the falsification of the official arrest report about the place of her arrest – according to Seif’s statements. In addition, the prosecution interrogated Seif regarding matters related to her personal life and turned a blind eye into Seif’s complaints about having wounds all over her body, especially the feet and back, following the assault on her. The prosecution only recorded the reason for her wounds, namely the assault by four unidentified women in front of the gate of Tora prisons.

In the same context, Seif has not obtained her appropriate legal rights. She and her lawyer were prevented from accessing the investigation report, arrest warrants, and investigations. In addition, her detention was renewed on paper without being debated, as she was absent from the sessions held to renew her detention, which took place on 5, 19 and 28 July, and 17 August 2020. The prosecution claimed that she could not attend as a precautionary measure against the Covid-19 pandemic.

The signatory human rights organizations renew their demand for the immediate release of Seif and all prisoners of conscience, and for an immediate investigation with her attackers. What is happening with Seif is part of a series of repressive and systematic violations by the authorities against human rights defenders in Egypt, which continue to deprive them of their right to a fair trial. There is no way to end this situation except by providing guarantees for a fair trial.

AFTE welcomes the release of some journalists