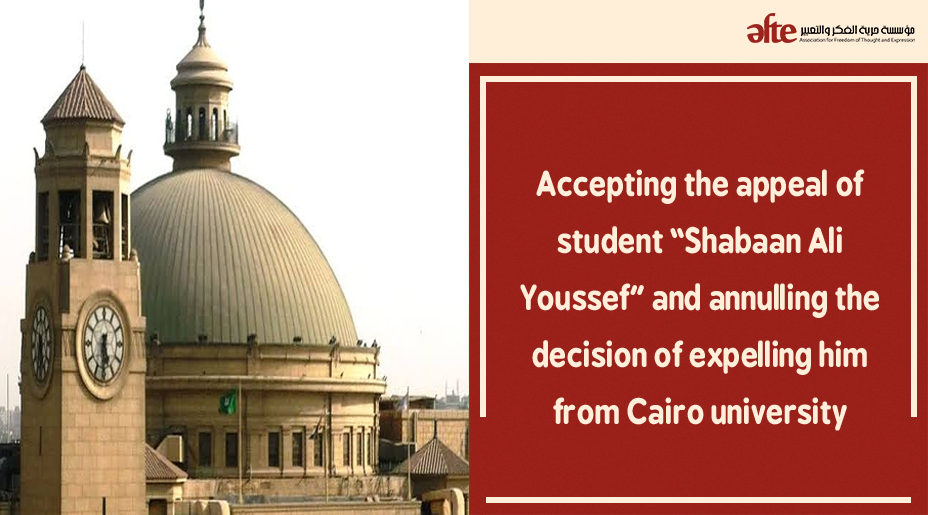 The Administrative Court has decided to accept the appeal in lawsuit No. 57228 of 73 judicial year, and to annul Cairo University’s decision to expel the student “Shabaan Ali Youssef”.

It is noteworthy that Cairo University issued a decision on August 23, 2015, to expel the student, in addition to three other students, final expulsion from the university, upon the accusations of participating in acts of violence and riots inside the university and joining a terrorist group in violation of the law.

The Sixth Circuit (Appeals Examination) of the Supreme Administrative Court, decided to reject the appeal against a student of Cairo University, submitted by Cairo University No. 53915 for the judicial year 65, to appeal against the Administrative Court’s decision in lawsuit No. 27173 for the Judicial Year 72, which states to rescission the decision of Cairo University’s president to dismiss him from Cairo University, under the pretext of demonstrating inside the university campus.
In August 2015, Cairo University decided to permanently dismiss the student, in addition to three other students, after they were accused of participating in violence and riots inside the university, and joining a banned group established in contravention of the law, as the four students demonstration in April 2015, in the events that led to the death of the student ” Anas Al-Mahdi” after clashes with the university security.
It is noteworthy that the Giza Department Prosecutor charged the students into Case No. 7674 of 2015, Giza department misdemeanors, with joining the student movement “students against the coup”, participating in a demonstration without notification, destroying public and private movables, possessing white weapons, and assaulting public officials while performing their work, the students spent almost 2 months in pretrial detention before releasing them.