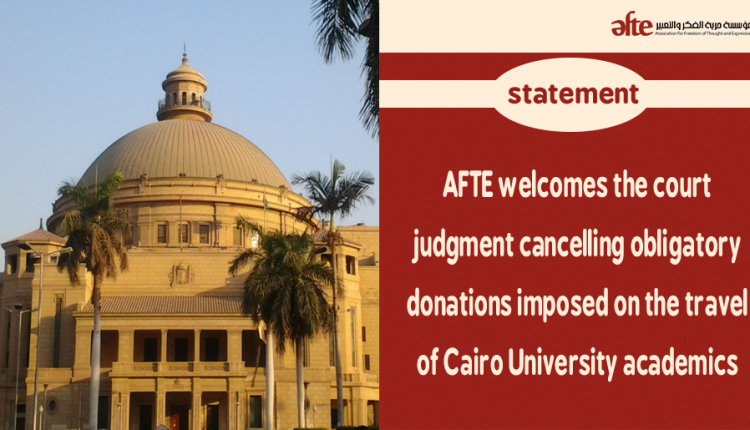 The Association for Freedom of Thought and Expression (AFTE) welcomes the judgment issued by the Administrative Court on 26 April 2021 to revoke the imposition of obligatory donations on the travel of Cairo University teaching staff, as well as the consequences thereof.
This came as the court accepted the appeal lodged in lawsuit No. 18906 against the imposition of such donations. This accordingly means that academics can reobtain all the sums they’ve paid to the university based on its illegal decision.

Cairo University had issued its decision on 29 July 2015 without referring to the Supreme Council of Universities. The decision obliged the teaching staff wishing to travel or work abroad to pay an amount of no less than 10,000 Egyptian pounds from the first until the tenth year, and 20,000 pounds from the eleventh year and over. If the teaching staff were to abstain from paying the specified sums, the university would not approve their travel, according to the decision.

AFTE filed the aforementioned lawsuit on 28 December 2015 to appeal the decision, on behalf of a Cairo University teaching staff member. The Administrative Court referred the case to the State Commissioners Authority for consideration. On 18 June 2019, the Authority recommended that AFTE’s appeal be accepted and the university’s decision be revoked.

AFTE considers this judgment as a significant victory for academic freedom, which includes the freedom of academic staff to work in and travel to all countries of the world without restrictions. The revoked decision constituted an obstacle for the teaching staff wishing to work abroad. Universities should not equate the obligation of teaching staff to pay money with donations that should be paid voluntarily. The university, thus, circumvented Article 7 of the law No. 49 of 1972 regulating the work of universities. The law stipulates that “universities are public entities that have a scientific and cultural identity, and have their legal personalities; universities have the right to accept donations as long as this doesn’t conflict with the objective of their establishment”.

The canceled decision also violates Article 38 of the Egyptian constitution which states that “public taxes cannot be established, modified, or cancelled except by law, and there can be no exemptions except in cases prescribed by law”. It also violates Article 40 of the constitution which stipulates that “private confiscation is prohibited except based on a court judgment”.

AFTE renews its call for the Ministry of Higher Education and the public university administrations to respect academic freedom and the Egyptian constitution and to allow academic staff and students to travel abroad without security or administrative restrictions.