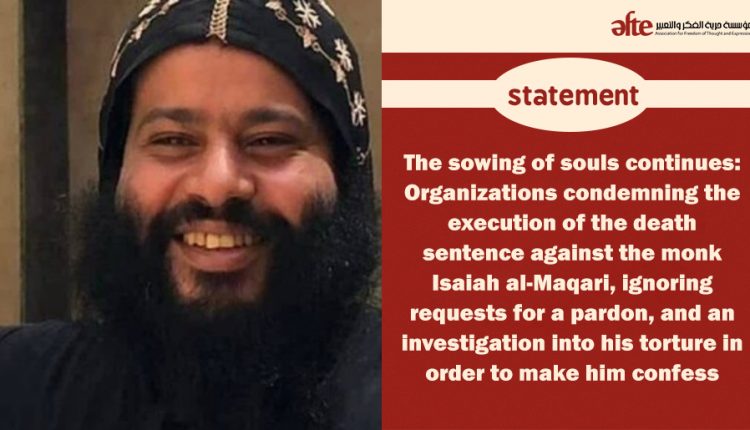 The sowing of souls continues: Organizations condemning the execution of the death sentence against the monk Isaiah al-Maqari, ignoring requests for a pardon, and an investigation into his torture in order to make him confess

The Stop the Death Penalty Campaign and the undersigned organizations express their deep condemnation and rejection of the execution of the death sentence against citizen Wael Saad Tawadros, whose canonical name is Father Isaiah al-Maqari, as the Prisons Authority Division of the Ministry of Interior carried out his execution this morning after the punishment was endorsed by the Criminal Department of the Court of Cassation on Wednesday 1 July 2020. The Public Prosecution accused Father Isaiah al-Maqari of killing Anba Epiphanius, Bishop and Head of the Monastery of Anba Makkar in Wadi al-Natrun, after the latter’s body was found in front of his cell in the monastery on his way to attend the Sunday mass on the morning of July 29, 2018.

After the lawyers were not allowed to attend the investigation sessions or the detention order hearings, the monk was referred to a criminal trial, during which he amended his confession which he had presented to the second circuit of the Damanhour Criminal Court and assured the court that his confession was the result of material and moral coercion through torture and electrocution and threats to compel him to confess and force him to re-enact the incident through a judicial officer, who is himself one of the witnesses in the case as well as in charge of conducting security investigations about the circumstances of the incident. However, the court set these demands aside, and on April 24, 2019, the Criminal Court issued its verdict to punish both Father Father Isaiah Al-Maqari and Father Faltas Al-Maqari did by death by hanging for the accusations against them. The criminal department of cassation addressed the case and decided to reduce the punishment of the latter and confirm the death penalty for the former.

The implementation of the death sentence against citizen Wael Saad by the Prisons Authority sector today comes as a continuation of the approach of the criminal justice system in Egypt to expand and excessive use of the punishment, as the Ministry of Interior carried out the death sentence against seventeen defendants, who were sentenced to final death sentences in the case known in the media as “The storming the Kerdasa police station”, by executing nine citizens on April 26, 2021, and executing eight others on April 28, 2021. This excessive expansion of the execution of this punishment shows that the Egyptian government does not respect the right to life, which is the inalienable right of every human being.

The family and defense team of Monk Isaiah were not informed of the date of the execution, which has become a custom followed by the Ministry of Interior of carrying out the death sentences without informing the relatives of the convicts of the execution date and not allowing them to meet them before the execution in accordance with Article 472 of the Code of Criminal Procedure, which stipulates that Relatives of the person sentenced to death have the right to meet him on the day appointed for the execution of the sentence, provided that this is far from the place of execution, and if the religion of the convict requires him to confess or make other religious obligations before death, the necessary facilities must be made to enable a cleric to meet him. Also, the mandatory presence of lawyers was stipulated in the first paragraph of Article 474 of the same law on the obligation to give permission to the defender of the convicted person to attend the execution.

However, the Egyptian Penal Code does not stipulate a penalty or punishment for violating the legal provisions regarding the implementation of the death penalty, and it is this legislative vacuum that helps law enforcement agencies not to comply with the legal rules and the principle of the rule of law affirmed by the Egyptian constitution. Failure to inform the family of the convicted persons of the date of the execution of the death sentence is a matter that affects the dignity and humanity of those who are executed, and on the other hand, it causes major psychological harm to the families of the executed.

Father Isaiah had been subjected to many violations since he was taken into custody until the execution of the sentence, including physical and moral exposure inside the monastery, where he was subjected to interrogation by security officers for a period of 48 consecutive hours as he was not allowed to use the toilet throughout that period. He was also subjected to enforced disappearance. He was arrested on August 5, 2018, but the case papers indicated that he had been released on August 6, and then was arrested from a checkpoint in Al-Buhaira on August 10 in order to enforce the arrest warrant issued by the prosecution against him. But the fact of the matter is that Father Isaiah was being held illegally throughout that time. He was also detained for a month in an illegal detention facility, which is the headquarters of the National Security Agency in Nubaria, and he was prevented from communicating with his family and a lawyer, in violation of the law.

Among the most important violations he suffered was torture during the first month of his detention in order to extract a confession of committing the crime, and although the lawyer submitted a memorandum to the Public Prosecution requesting investigation into the incidents of torture, this warrant was not considered and investigated. This violation ended with the prevention of Father Isaiah and his family from the last visit before his execution, as stipulated in Egyptian law. The lawyer of father Isaiah had submitted in March 2021 a request to Public Prosecutor to review the case which he based on a discrepancy between the conclusions by forensics, with regards to the wounds of the victim and the tool supposedly used to commit the murder, and the segmental wounds apparently found on his body.

During recent years, many countries, international bodies and human rights institutions have called for a moratorium on the implementation of the death penalty as a criminal deterrent and to replace it with penalties such as life imprisonment or work for public service and other alternatives, which was asserted by the United Nations General Assembly in its annual resolution adopted and issued in January From 2018, which called for a moratorium on the death penalty worldwide, a decision which received the support of 121 countries.

Therefore, the Stop the Death Penalty Campaign in Egypt and the undersigned organizations call upon the Egyptian government to immediately halt the implementation of the death penalty and to abide by the Egyptian Code of Criminal Procedure by informing the families of those sentenced to death of the execution deadline and allowing them to visit the convicted person in accordance with what is stipulated in Egyptian law. The Egyptian government must also adhere to standards of transparency and provide information about the implementation of the death penalty, given that the withholding of information by the Ministry of Interior and the failure to announce the names of the executed causes marked suffering to their family members who are left unsure of the accuracy of information published in the media.