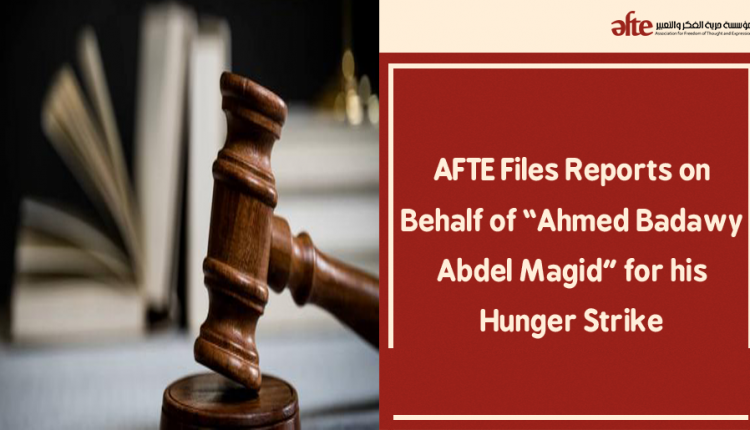 Association for Freedom of Thought and Expression (AFTE), filed yesterday June 6, 2021, reports on behalf of “Ahmed Badawy Abdel Magid” who’s detained pending case No. 674 of 2019, to Attorney General under No. 260527716, Maadi’s Chief Prosecutor under No. 260527718, and Assistant Minister of the Interior for the Prison Service Sector under No. 2605277370, this came as the defendant went on a hunger strike demanding his release, for exceeding two years in pretrial detention pending that case, which is the maximum period of pretrial detention according to the law.

The defendant was arrested on April 21, 2019, by the Fifth Settlement perimeter security, while holding a banner to call on citizens to vote no to the constitutional amendments, he was investigated before the Supreme State Security Prosecution on April 28 of the same year, and he was charged with joining a banned group, using a social media account to commit a crime that threatens the security and safety of society.

AFTE demands the opening of an urgent investigation concerning the defendant’s hunger strike and providing him with the necessary healthcare by the “Supermax prison 2” prison administration where the defendant is serving his pretrial detention.