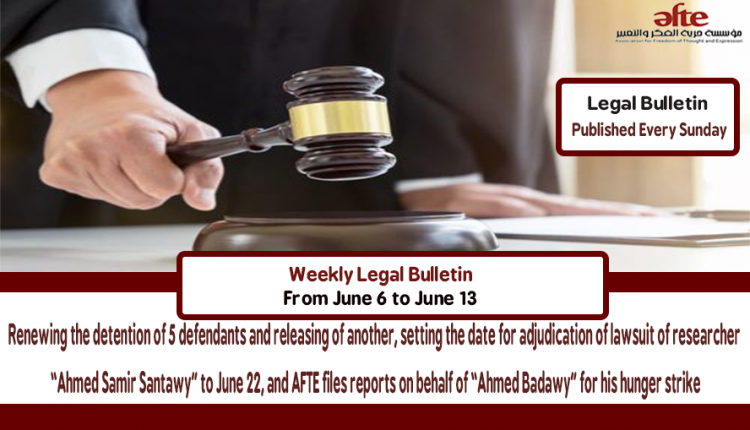 Renewing the detention of 5 defendants and releasing of another, setting the date for adjudication of lawsuit of researcher “Ahmed Samir Santawy” to June 22, and AFTE files reports on behalf of “Ahmed Badawy” for his hunger strike.

June 6, 2021: The Council Chamber of The Criminal Court renewed the pretrial detention of both “Belal Abdel Razek” and “Mohamed Gaber Soliman El-Masry” for 45 days, pending Case No. 488 of 2019 Supreme State Security.

It’s noted that “Belal” was arrested on March 1, 2019, while participating in a vigil in the area of Mohamed Naguib in Alexandria, and “Mohamed Gaber” – member of the supreme authority of “Strong Egypt” Party – was arrested on Wednesday, September 25, 2019, from his workplace in the 10th of Ramadan city.

While The Third Circuit Criminal Terrorism renewed the pretrial detention of journalist “Amer Abdel-Moneim” -57 years old- for 45 days pending Case No. 1017 of 2020, the security forces arrested him on December 18, 2020, from his house in Al-Haram area, to appear two days later at the Supreme State Security Prosecution.

“Amer” suffers from a chronic viral infection in his eyes, in addition to diabetes, and he had two operations on his eyes less than two months before his arrest.

AFTE issued a statement calling on the Public Prosecutor to release him and urging the Journalists Syndicate to intervene immediately to enable him to receive healthcare.

In another context, The Third Circuit Terrorism decided to replace the pretrial detention with precautionary measures for the defendant “Ahmed Mohamed Hassan Sambo” who was arrested on August 12, last year, pending Case No. 1116 of 2020, Supreme State Security.

And at the June 7, 2021 session, The Third Circuit Criminal Terrorism renewed the pretrial detention of “Alaa Essam,” who was working as an accountant at the Egyptian Forum for Labor Relations, for 45 days pending Case No. 930 of 2019 Supreme State Security, known in the media as “The Hope Coalition Case”

The police arrested “Badawy” on April 21, 2019, while he was standing in a square in the fifth settlement carrying a sign that says “No to the Constitutional Amendments”, he appeared a week later at the Supreme State Security Prosecution while he was being investigated.

AFTE demanded the opening of an urgent investigation concerning the defendant’s hunger strike and providing him with the necessary healthcare by the “Supermax Prison 2” administration where “Badawy” is serving his pretrial detention. It is reported that “Badawy” was a former member of the “Al-Ghad” party, and he joined the “Strong Egypt” party after the 25th of January revolution. He was also subjected to a travel ban in December 2015, and the Cairo Airport authorities confiscated his passport, mobile phone, and personal computer, while he was trying to travel to Beirut for work.

The defense team adhered to include the investigation file of “Santawy” in the first case, Case No. 65 of 2021, in which he was accused since last February, as the merits of the two cases are related.

The defense team pleaded with the invalidity and illegality of the evidence derived from the report issued by the General Department of Criminal Evidence, the invalidity of the evidence derived from the national security investigations for its contradiction of reality and truth, and its editor did not follow the correct legal methods, the discrepancy between the reporter’s statements, the investigations’ path, and the report of the General Department of Criminal Evidences, and the absence of the elements of the offenses crimes by the text of Articles 80 and 102 bis of the Egyptian penal law.

The defense team requested the defendant’s acquittal from the charges attributed to him, as the State Security Emergency Misdemeanour Court is an emergency exceptional court in which its sentences cannot be appealed, and these charges may lead to imprison “Santawy” for up to 5 years.

Release of all defendants in Shooting Club Case

AFTE and ANHRI appeal against the refusal to grant Dr. Manar Al-Tantawi her…