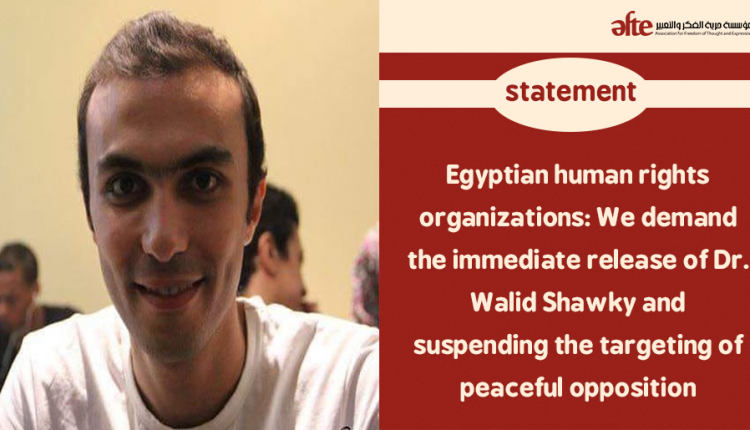 Egyptian human rights organizations: We demand the immediate release of Dr. Walid Shawky and suspending the targeting of peaceful opposition

The undersigned human rights organizations call for the immediate and unconditional release of Dr. Walid Ahmed Shawky, 34, one of the founders of the April 6 Youth Movement, who has been in arbitrary detention for two years and seven months, as he is being re-imprisoned in connection with a new case since last October. The organizations believe that Shawky’s arbitrary detention was in retaliation for his peaceful exercise of his right to freedom of expression and organization relating to his previous political activity. The organizations call on the Public Prosecutor to immediately intervene to stop the practices of arbitrary detention and prolonged pretrial detention practiced by the State Security Prosecution against activists and peaceful opponents, including Shawky’s colleague in the case, researcher Ayman Abdel Moati.

Security forces had arrested Shawky on October 14, 2018, from his clinic in the Sayeda Zeinab district, and he was listed in the State Security Case 621/2018 on October 20, after being forcibly disappeared for 6 days. The State Security Prosecution charged him with joining a group established in violation of the provisions of the law, and publishing false news and statements. This case also included researcher and proofreader Ayman Abdel Moati, who is facing the same accusations.

On August 24, 2020, after 22 months of Shawky’s detention, the Criminal Court decided to release him and his two colleagues. However, days after he was transferred to the Dikirnis Police Department of his place of residence in Dakahlia in preparation for his and his colleagues’ release, his family was surprised that he was forcibly disappeared again on September 1 for over a month, until he appeared at the State Security Prosecution on October 6 after hiding him in a National Security headquarters, and investigated in the State Security Case 880/2020 where dozens of detainees are held in custody against the backdrop of the September 2020 protests. Based on an investigation report written by the National Security, the Public Prosecution Office charged Shawky with the same accusations that had previously been brought against him in the first case, in addition to the charge of participating in a gathering, dating back to Shawky’s detention and forced disappearance by the National Security!

It is worth noting that the Cairo Criminal Court had previously issued two decisions releasing Shawky in the first case and replacing imprisonment with precautionary measures on October 23, 2019 and December 3, 2019, but they were not implemented due to unjustified intransigence. The court accepted the prosecution’s appeal against the two release decisions. The same thing was repeated for the third time in August 2020, as the prosecution and the criminal court refused to replace his pretrial detention with precautionary measures, and renewed his arbitrary detention, while releasing dozens of detainees in the same case. This is in addition to the prosecution’s continuing to reject Shawky’s defense requests to appeal the decisions to renew his detention, knowing that there is no real legal need to detain him, or fear of his escape, as he has a permanent known place of residence, in addition to the fact that his peaceful exercise of freedom of opinion and expression does not essentially represent a danger to Public Security.

The organizations that signed this statement denounce the intransigence of the State Security Prosecution and its unjustified retaliation against Shawky, and the continuation of renewing his detention for more than two and a half years without referring him to the court for issuing an objective verdict on the charges against him. It also condemns this blatant circumvention of the Code of Criminal Procedure, by including prisoners of conscience and political detainees in new cases after they have exceeded the period of pre-trial detention and directing the same charges against them, or accusing them of new ones that they allegedly committed during their detention. Therefore, the organizations demand the immediate release of Walid Shawky and Ayman Abdel Moati, and the dropping of all the charges against them. The organizations also call on the Public Prosecutor to release peaceful opponents held in pretrial detention, especially those whose imprisonment exceeded two years, and to stop the prolonged arbitrary and malicious detention practices that undermine the principle of the rule of law, while granting the security services the power to deprive citizens of their freedoms instead of the judicial authority.

The Association for Freedom of Thought and Expression (AFTE)