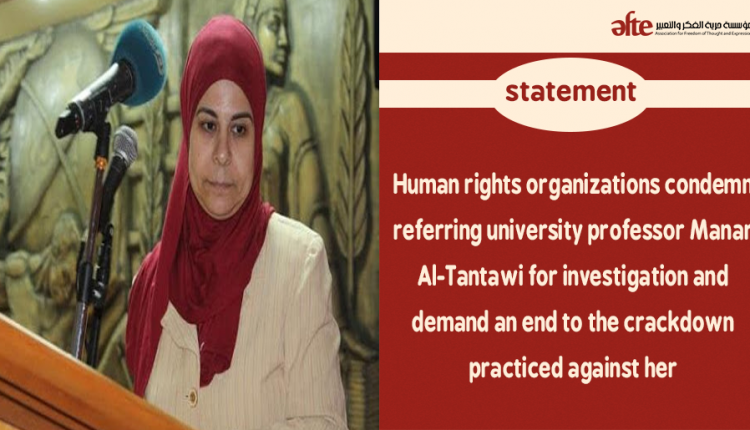 The undersigned organizations condemn the decision of Othman Muhammad Othman, the Dean of the Higher Technological Institute (HTI) in the 10th of Ramadan City, to refer Dr. Manar Al-Tantawi, an assistant professor at the Institute (6th of October Branch) who holds a professorial degree upon a decision by the Universities Supreme Council, for investigation. The organizations call on the institute to immediately halt this arbitrary investigation and enable “Tantawi” to obtain her legal right to chair the Department of Mechanical Engineering at HTI’s Sixth of October Branch, for being the most senior assistant professor within the department, as stipulated by the law.

Tantawi had unofficially received two letters signed by the director of legal affairs at the institute (6th of October branch) asking her to appear before the institute’s legal investigator on Tuesday 29 June 2021. The letters didn’t mention the entity that summoned her for investigation nor any accusations or incidents pertaining to this investigation, which constitutes a flagrant and explicit violation of the law and the general rule on which the legality and legitimacy of penalties issued by the Supreme Administrative Court are based. This exposes the institute’s dean’s intention and attempts to crack down on university professor Manar Al-Tantawi by depriving her of her right to obtain the academic degree and title and to be reinstated in her official position as the chair of the department.

The targeting of Tantawi dates back to her request, in which she asked for her legal right to be enabled to chair the Mechanical Engineering Department at the institute’s Sixth of October Branch, a position which she had previously turned down, temporarily, for health reasons. However, the Dean of the Institute refused to reinstate her in her position, citing the fact that she is the wife of former prisoner of conscience and journalist Hisham Jaafar.

Tantawi is facing another form of abuse and arbitrariness, which is the Ministry of Higher Education’s non-approval to grant her professorship till now, despite the fact that the Permanent Scientific Committee examined her scientific contributions in December 2019 and accordingly, the Supreme Council of Universities issued a decision (for her), in February 2020, approving to grant her the academic degree. What is left, hence, is the approval of the Ministry of Higher Education which is shelving her papers without giving any reasons, and therefore preventing Tantawi from being officially appointed to the professorship.

At this time, the undersigned human rights organizations express their full solidarity with Dr. Manar Al-Tantawi against the repeated arbitrary measures practiced by the Dean of the Higher Institute of Technology (HTI) in the 10th of Ramadan City, and against the use of her husband’s pretrial detention in an opinion case to discourage her from demanding her rights, in addition to the ongoing appointment of people who are close to the institute’s dean in the position that she deserves. The organizations also call on HTI to immediately halt the arbitrary investigation with Tantawi and enable her to obtain her right to chair the Mechanical Engineering Department.

The undersigned organizations urge the Ministry of Higher Education to put an end to its procrastination in approving Manar Al-Tantawi’s appointment to the professorship, to confront the practices of the HTI’s Dean which undermine the professor’s rights, and to consider the complaint (No. 1120) which she submitted to the Office of the Minister of Higher Education on the second of June 2021.

The Internet and the Law in Egypt Series (First Part: Centralization of Telecommunications)