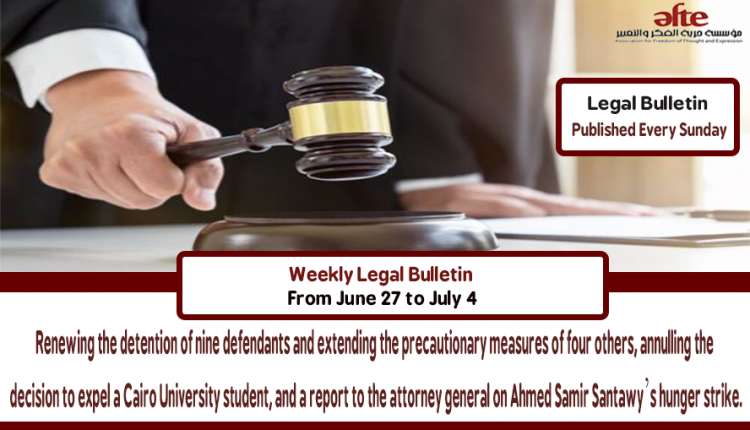 Renewing the detention of nine defendants and extending the precautionary measures of four others, annulling the decision to expel a Cairo University student, and a report to the attorney general on Ahmed Samir Santawy’s hunger strike.

June 27, 2021: The Third Circuit Terrorism renewed the pretrial detention of “Ahmed Maher Ezzat” known as “Rego”, the director of “Bohemian” studio, for 45 days pending Case No. 855 of 2020, Supreme State Security, after he was arrested from his workplace on  May 4, 2020, and he was first investigated in case No. 586 of 2020, Supreme State Security, and he was detained for almost 5 months, until a decision to replace his pretrial detention with precautionary measures was issued but it wasn’t implemented, instead he was investigated in the new case. It should be noted that “Maher” had worked before for Lieutenant General “Samy Anan’s” presidential campaign in 2018, and for the “Strong Egypt” political party headed by former presidential candidate, Dr. “Abdel Moneim Aboul Fotouh.”

On Monday’s session June 28, 2021, The Council Chamber of the Criminal Court renewed the detention of the Assistant Professor at National Research Centre “Hamed Sedeek,” for 45 days pending Case No. 1356 of 2019, Supreme State Security. “Sedeek” was arrested from his house on September 23, 2019, and he suffers from cruel detention conditions in Al-Aqrab Prison, in addition to being prevented from doing outdoor sports and receiving letters and books according to his lawyers and family’s testimonials.

The Third Circuit Terrorism renewed the pretrial detention of vice president of the “Strong Egypt” political party “Mohamed Ali Ibrahim Al-Qassas” for 45 days pending Case No. 786 of 2020, Supreme State Security. Notably, this case is Al-Qassas’s third case, as the security forces arrested him in February 2017, from Salah Salem road while he was heading to attend a wedding, and was kept in solitary confinement at Tura’s Supermax Prison known as Al-Aqrab Prison, pending the first Case No. 977 of 2017, known in the media as “Mekamleen 2.” He was prevented from visits, outdoor sports, books, and medications, and after being detained for 2 years, which is the maximum period of pretrial detention according to the law, the attorney general issued a decision to release him, only after 3 days he was detained again pending the second case No. 1781 of 2019, Supreme State Security, and after 7 months in pretrial detention, the Criminal Court decided to replace his detention with precautionary measures. The decision wasn’t implemented either, and after two days, he was recycled in the new case with the same old charges, although he was kept in solitary confinement.

And in the session of June 29, 2021, The Third Circuit Criminal Terrorism renewed the pretrial detention of “Alaa Essam,” who was working as an accountant at the Egyptian Forum for Labor Relations, for 45 days pending Case No. 930 of 2019, Supreme State Security, known in the media as “The Hope Coalition Case.”

It also renewed the detention of both “Mohamed Salah Abdel Aziz” and “Ahmed Yousry Ghaly” for 45 days pending Case No. 855 of 2020, Supreme State Security, and also decided to extend the precautionary measures of “Khaled Elsayed Elbadawy” and “Ahmed Fathy Massoud” for 45 days pending the same case. The security forces arrested “Salah” on November 2019, he was detained pending Case No. 488 of 2019, Supreme State Security, on July 19, 2020, The First Circuit Terrorism decided to replace his pretrial detention with precautionary measures, and the prosecution didn’t appeal the decision, and he was recycled in the current case.

The Council Chamber of the Criminal Court had decided to renew the detention of 2 defendants for 45 days, and to extend precautionary measures of 2 others for 45 days pending Case No. 751 of 2020, Supreme State Security. Notably, the defendants are charged with joining “Ultras White Knights.”

June 28, 2021: The Administrative Court has decided to accept the appeal in lawsuit No. 57228 of 73 judicial years, and to annul Cairo University’s decision to expel the student “Shabaan Ali Youssef.” It is noteworthy that Cairo University issued a decision on August 23, 2015 to expel the student, in addition to three other students, with final expulsion from the university upon the accusations of participating in acts of violence and riots inside the university and joining a terrorist group in violation of the law.

After “Santawy” announced his hunger strike since the announcement of the sentence against him, which is four years imprisonment and a fine of 500 EGP in Case No. 774 of 2021, State Security Misdemeanor (the First Settlement) with charges of spreading false news from abroad about the domestic situation, this came as an objection on the sentence that cannot be appealed according to the emergency law.

The defense counsel also requested opening an investigation on Santawy’s hunger strike, and hospitalizing him in the prison hospital to monitor his health condition  periodically.

It is worth noting that “Santawy” is still detained pending another case, No. 65 of 2021, Supreme State Security.