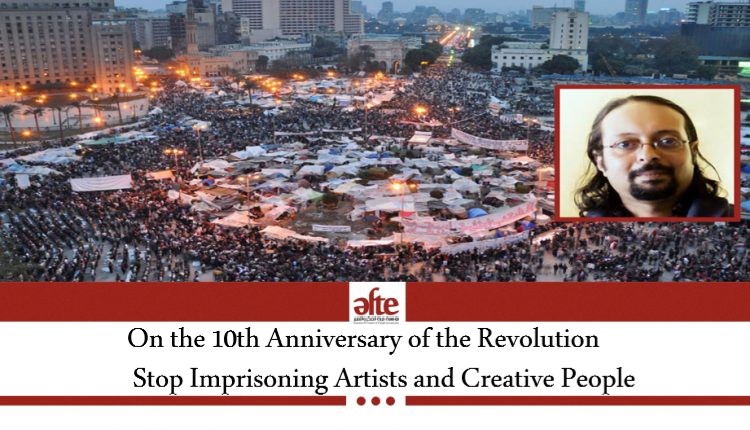 On the 10th Anniversary of the Revolution, Stop Imprisoning Artists and Creative People

The Association for Freedom of Thought and Expression (AFTE) calls on the Egyptian authorities to release cartoonist Ashraf Hamdy, who was arrested on Monday 25 January 2021, on the 10thanniversary of the Egyptian revolution. It also calls on the authorities to stop cracking down on artists and creative people and charging them for doing their work and exercising their right to expression and creativity.

Hamdy announced his arrest on Facebook. Security sources told Reuters that they had arrested him from his home on charges of misusing social media and spreading false news. Earlier, Hamdy posted a cartoon video on his YouTube channel “Egyptoon” about the 10th anniversary of the revolution, praising the youth of the revolution.

The Egyptian state’s narrative is not consistent with its practices. At a time when President Abdel Fattah al-Sisi points out that “the 25 January revolution was led by loyal youths looking forward to a better future and reality”, the Egyptian authorities are persistently cracking down on those youths. They usually increase pre-emptive repressive practices, including arrests, detention and imprisonment,ahead of any anniversary of key events that have taken place since the 25 Januaryrevolution. These systematic practices are hostile to creativity and creative people, especially opponents.

In a similar context, the Supreme State Security Prosecution renewed the detention of graphicdesigner Bassem al-Shahawi for another 45 days on 17 January 2021. Shahawi has been in pretrial detention for a year now.

Shahawi was arrested from his home in Cairo on 5 February 2020 for his work on a documentary about the Ethiopian Renaissance Dam. He was charged in Case No. 585 of 2020 (State Security Prosecution) which deals with publication during the Covid-19 pandemic.

The crackdown does not stop just by imprisoning creative people. The Egyptian authorities do not only arrest young people due to their artistic works and restrict their freedom under the pretext of pretrial detention, but the matter sometimes reached the degree of murder by refraining, as happened with young photographer and filmmaker Shady Habash who died in prison after the prison doctor reportedly ignored his repeated health complaints. Accordingly, AFTE called on the Attorney General to launch a transparent and independent investigation into the circumstances of his death.

In this regard, AFTE calls on the Egyptian authorities to immediately release Hamdy, stop imprisoning creative people and opinion-makers, and stop ‘recycling’ released creative people in new cases. AFTE also calls on the Attorney General to release Bassem Abdel Salam al-Shahawi and Mostafa Gamal, as per the powers granted to him in Article 204 of the Criminal Procedure Code.

AFTE stresses that it is dangerous that the authorities continue to ignore the human rights organizations’ callsfor halting the crackdown on creative people and opinion-makers and releasing those in pretrial detention. The overcrowding in Egyptian prisons, especially amid the Covid-19 pandemic, may constitute a systematic suppression of freedom of expression and disregard for the prisoners’ health.