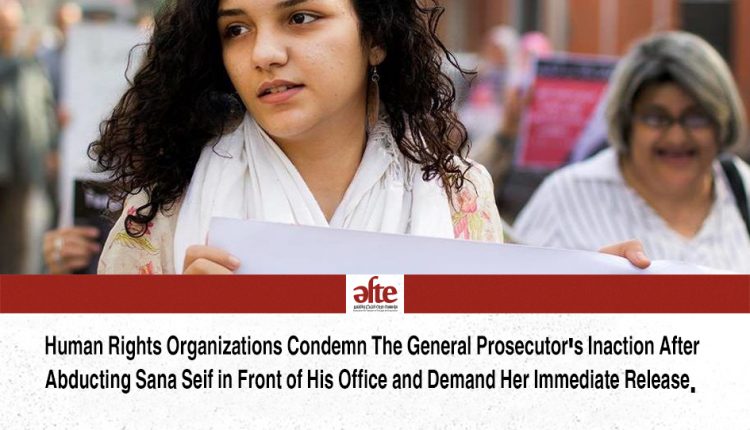 Human Rights Organizations Condemn The General Prosecutor’s Inaction After Abducting Sana Seif in Front of His Office and Demand Her Immediate Release.

The undersigned NGOs condemn the series of violations the arbitrarily detained activist Alaa Abd-El Fattah’s family has faced. The last of which was today, when a police force had abducted his sister, Sana Seif, where she was approaching the Public Prosecutor’s Office,  attempting to file a report about the assault against her and her family in front of Tora prison yesterday.

On Tuesday afternoon, Plain-clothes police officers, who didn’t identify themselves, abducted Sanaa Seif. Then she has been brought, as a defendant, before the Supreme State Security Prosecution, which ordered her detention for 15 days, pending investigations in lawsuit N.659/2020.

In the early morning of last Monday in front of Tora prison gate, a group of women physically assaulted Sanaa Seif, her mother, Prof. Laila Souief, and her sister Mona; aggravated battery, dragging, and personal belongings theft. And Tora prison security forces did not intervene to protect them. Sanaa and her family were sitting-in for a whole night in front of the prison, demanding to check on the activist and blogger in custody, Alaa Abd El Fatta.

It is worth mentioning that Alaa Abd El Fattah’s family couldn’t have communicated with him for three months since the suspension of the in-person family visits and the failure to transfer defendants to detention renewal hearings. Accordingly, such an aggressive attitude against Alaa Abd El Fattah’s family raises concerns about his safety in prison.

Also, The signatory organizations deplore General Prosecutor’s complicity with the security apparatus. He has made no action to protect victims, who resorted to him ending abuses against them. Additionally, his constant neglect of Alaa Abd El Fattah’s family’s distress calls to enable them to communicate with Alaa and check on his health situation in prison.

Signatories support Alaa Abd El Fattah’s family’s demands to communicate with him, whether by written letter or phone call, as provisioned by the Prisons Regulation Law. Article N. 38 stipulates that “… Every convict has the right to keep up a correspondence and to be visited by his relatives twice per month according to the prison regulations. Persons in remand detention also have the same right in this regard, unless a decision is issued by the competent public prosecutor or the investigating judge otherwise…”

The undersigned organizations are demanding the General Prosecutor release Sanaa Seif immediately and investigating her abduction in front of his office. Also, to investigate the physical assaults against her and her family and the Tora prison forces’ inaction to protect them during yesterday’s incident.