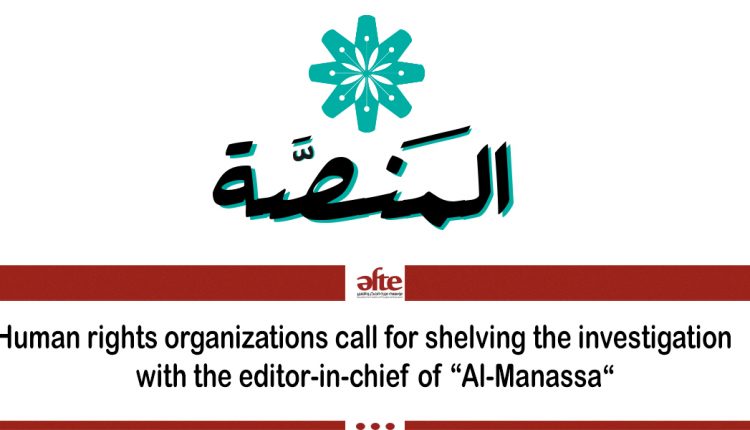 The undersigned organizations condemn in the strongest terms the arrest of Nora Younis, editor-in-chief of Al-Manassa website, after the security forces raided the headquarters of the website, on June 24. They affirm that what happened comes in the framework of the ongoing violations of freedom of the press in Egypt, which has been escalating for years. The signatories call on the Egyptian authorities to stop the restrictions and violations against the independent press and to respect its constitutional and legal right to practice its work freely. They also urge the authorities to shelve the investigation with Younis immediately, and to open an investigation into the incident of storming the website, intimidating its employees, and arresting Younis.

On June 25, the Maadi prosecution ordered the release of Younis on LE10000 bail, pending investigations into police record no. 9455 of 2020 Maadi Misdemeanor. Younis is accused of creating a platform to commit and facilitate commission of a legally punishable cybercrime, possessing unauthorized software, trespassing on the financial and intellectual property rights of the software’s rights holder, and utilizing the information system network, information technology means, and telecommunications services without merit.

It is noteworthy that Al-Manassa website is committed to using original or open source copies of operating systems and software on its computers. The website’s administration also submitted a request to the Supreme Council for Media Regulation (SCMR) to obtain a website license. However, all this did not prevent the security forces from arresting Younis, after filing a police record against her.

The prosecution’s accusations against Younis point to the multiplicity of laws and bodies through which violations and restrictions can be practiced against independent press websites in Egypt. Moreover, the prosecution did not charge Younis of any accusations in accordance with the law regulating the press, media, and the Supreme Council for Media Regulation.

The undersigned organizations confirm that Al-Manassa and its editor-in-chief were not subject to an individual incident, but rather a regular pattern of violations by the Egyptian authorities against independent press websites. This pattern of violations started more than three years ago with the expanded campaign launched by the Egyptian authorities in May 2017 to block press websites, the number of which according to the latest monitoring of the Association for Freedom of Thought and Expression reached 127 press/media websites. Al-Manassa was among the first press websites to be blocked in Egypt.

The signatories also consider that violations against press websites are consistent with the general context of anti-press freedom in Egypt that has been escalating since the summer of 2013, with Egyptian authorities seeking to control the flow of news and information through cyberspace, having tightened their control over traditional media. To achieve this, the Egyptian authorities used a package of practices and legislation that legalized blocking, the most prominent of which was the anti-cybercrime law, which granted juridical and investigative bodies the power to block websites, in addition to the law regulating the press, media and the Supreme Council for Media Regulation, which granted the SCRM the authority to block press websites.

Blocking websites was not the only type of violation of the right to freedom of the press in Egypt, as many journalists were subjected to arrest and pre-trial detention, and were sometimes sentenced to prison for practicing their work.

The signatories stress that the SCMR and the Journalists Syndicate must assume their responsibilities to protect freedom of the press and journalistic work, and to stop violations of independent press websites through entities such as the “Artistic Products Investigations” and other security agencies, which constantly violate press freedom. They also call on the SCMR to quickly issue the necessary licenses for press websites that have applied to the Council to regulate their status.

The pandemic hasn’t stopped repression: An outlook on how the Egyptian state has controlled the internet under COVID-19