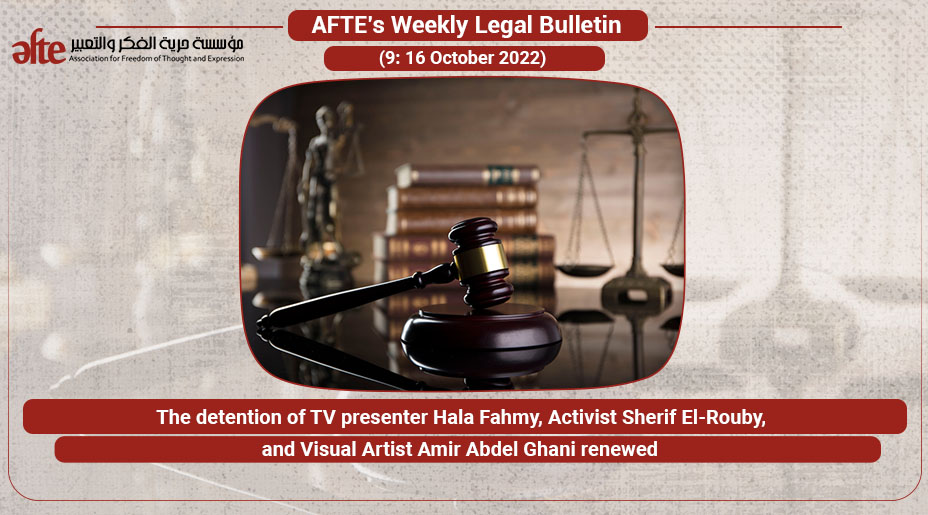 On October 10, the Criminal Court (2nd Criminal & Terrorism Circuit) renewed the detention of former TV presenter Hala Fahmy, for 45 days in connection with Case No. 441 of 2022 (Supreme State Security), which Fahmy has been accused since her arrest took place in April.

According to AFTE’s lawyer, Fahmy was arrested after she posted several videos about the Egyptian economy, the crisis of the Grand Ethiopian Renaissance Dam (GERD), and Emirati investments in Egypt; after her arrest, the Prosecution confronted her with the videos in addition to official statements from the Central Bank of Egypt and the Cabinet Information Center that denied some of the information contained in Fahmy’s posts.

It should be noted that Fahmy was summoned before the Supreme State Security Prosecution without a lawyer; the prosecution charged her with joining a terrorist group, incitement to commit a terrorist crime, and spreading false news domestically and abroad.

Hala Fahmy is a senior TV presenter with the rank of general manager at Egyptian state television; she worked as a broadcaster for several Egyptian TV channels. She hosted several TV programs throughout her career, such as “hearts that love you”, “the children’s world,” “my beautiful country,” and “consciousness”.

Security forces took Abdel Ghani to an unknown place after his arrest. He was subjected to enforced disappearance for nine days, during which his family and his lawyer tried to communicate with the concerned authorities to find out where he was detained and the reasons for his detention; these attempts failed until he appeared before the Supreme State Security Prosecution, which charged him with joining a terrorist group with knowledge of its aims, spreading false news and statements that would harm public peace and order, and using a social media account to spread false news and statements.

On October 5, AFTE submitted a request to the Attorney General Hamada Al-Sawy, which held No. 46571 of 2022 (Attorney General’s petitions) to release Abdel Ghani; his family also addressed all members of the Presidential Pardon Committee.

Amir Abdel Ghani is a member of the Syndicate of Fine Artists. He has participated in several art exhibitions in Egypt and has never been involved in any political activity.

El-Rouby was detained pending Case No. 1111 of 2020 (Supreme State Security Prosecution) for almost a year and a half until he was released on June 2 as part of the presidential pardon initiative. After nearly three months, he was arrested again, on September 16, 2022, from a hotel in Ahmed Hilmy square, Cairo; it is worth noting that El-Ruby expected to be illegally arrested and detained again, according to statements he made in a telephone interview on Al-Jazeera.

Sherif El-Rouby is a former political activist at the April 6 Movement, and he currently faces charges of joining a terrorist group, spreading false news, and misusing social media.