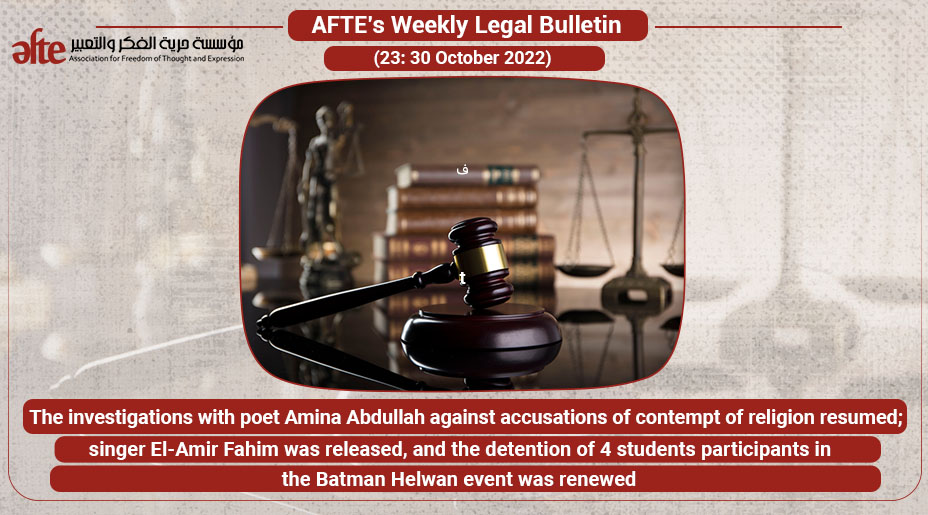 AFTE’s Weekly Legal Bulletin (23: 30 October 2022) | The investigations with poet Amina Abdullah against accusations of contempt of religion resumed; singer El-Amir Fahim was released, and the detention of 4 students participants in the Batman Helwan event was renewed

The Supreme State Security Prosecution released singer and student El-Amir Fahim under the guarantee of his place of residence in connection with Case No. 440 of 2022 (Supreme State Security). This comes within the presidential pardon initiative to release political prisoners who have not been sentenced before a court.

Fahim’s video song while wearing a military uniform was the reason for his arrest that took place on June 28. He faced charges of joining a terrorist group, spreading false news, and using a social media account to commit a crime.

The four students face charges of joining a terrorist group, spreading false news, and inciting a terrorist act against their participation in the “Batman Helwan Event” on Facebook, in which hundreds of thousands of Facebook users and celebrities engaged with, in a statement regarding the incident, the Ministry of Interior announced that all legal measures had been taken against the event’s organizers as they exploited the reach volume to achieve financial gains.

The Prosecution of South Cairo Court, again, summoned the poet Amina Abdullah to resume its investigations with her regarding accusations of contempt of religion and taking god’s name in vain against a report filed by a lawyer against her, which carried No. 80 of 2022 and registered under No. 37 of 2022.

The lawyer’s report came regarding several phrases used by Abdullah in her divan “girls for pain,” which was published in 2019; the Prosecution summoned Abdullah for the first time to interrogate her on October 16, and she was released on October 18, on a 5 thousand Egyptian Pounds bail.

On October 23, the Administrative Judiciary Court adjourned to next December 25 the examination hearing of the two lawsuits filed by AFTE regarding broadcasting the sessions of the house of representatives and the Senate on TV, digitally, and publishing them via the Official Gazette for pleading.

AFTE’s lawyers requested the court to allow them to obtain a certificate from the official gazette to indicate if the sessions of the Senate and the House of Representatives are published in the Official Gazette; however, the court did not consider their request.

The two lawsuits were filed on May 2021 against the speaker of the Senate, which carried No. 46319 of 75, and against the speaker of the House of Representatives, carried No. 46322 of 75, challenging the negative decision not to broadcast the senate and the House of Representatives sessions in a manner that prevents citizens’ political participation and popular control over members of the legislative authority.

It should be noted that the State Commissioners had previously accepted the lawsuit against the house of representative in form and rejected their merits, as the appealed decision is one of the administrative decisions of the House of Representatives; thus, it’s not justiciable, and the law stipulates the publicity of the council’s sessions, but it does not specify a specific way to achieve this publicity, the State Commissioners Authority believes that publishing some extracts from what happened in the sessions, whether via the press or social media achieves the principle of publicity, and that there is no constitutional obligation for the House of Representatives to air their session on TV, and that the council has the right to choose the appropriate means for it to achieve publicity.