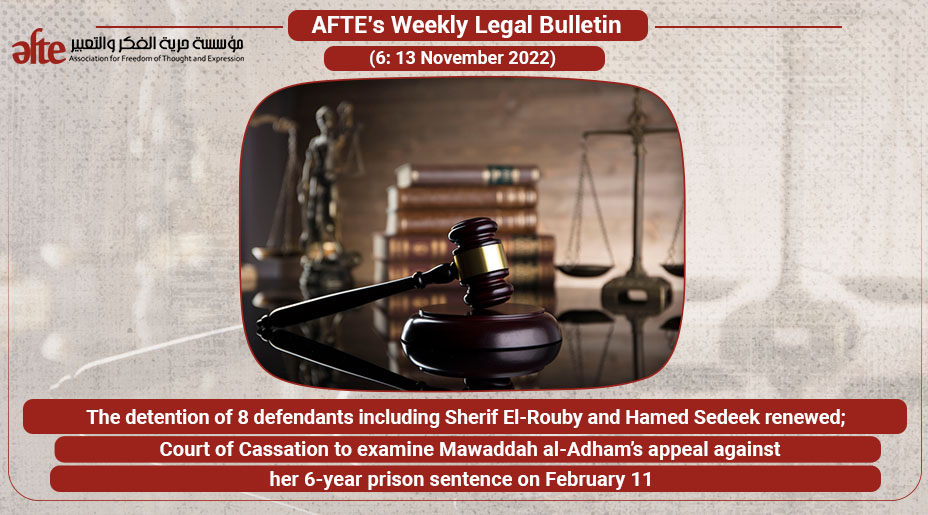 On November 6, the Supreme State Security Prosecution conducted its first interrogation session with defendant Hussein Ali Abdo, and decided to detain him for 15 days in connection with case No. 1977 of 2022 (State Security).

Security forces detained Abdo in an unknown place for 10 days before he appeared before the Supreme State Security Prosecution on November 6, and charged him with joining a terrorist group, commiting a financing crime, spreading false news, participating in a criminal agreement aimed to commit a crime and inciting a terrorist act.

The four students were arrested against the background of their participation in a sarcastic event called “Batman Helwan,” after many social media users interacted with the event; in a statement regarding the incident, the Ministry of Interior announced that all legal measures had been taken against the event’s organizers as they exploited the reach volume in order to achieve financial gains. The four students face charges of joining a terrorist group, spreading false news, and inciting a terrorist act.

The Supreme State Security Prosecution renewed the detention of Momtaz Ahmed Lotfy for 15 days in connection with case No. 1539 of 2022 State Security.

The Supreme State Security Prosecution interrogated Lotfy for the first time on September 5, and charged him with joining a terrorist group, spreading false news, and misusing social media.

The Supreme State Security Prosecution also renewed the detention of activist Sherif El-Rouby for 15 days, in connection with Case No. 1634 of 2022 State Security, in which El-Rouby is convicted after less than 3 months of his release pending another case.

El-Rouby was arrested on the 16th of September after he participated in an interview on Al-Jazeera in which he talked about the difficulties the released detainees of political lawsuits face, such as social ostracism and the nearly impossible chance of them obtaining a job that guarantees them a decent life after their release, in addition to preventing him from traveling abroad and the authorities refused to issue him a passport. He faces charges of joining a terrorist group, spreading false news, and misusing social media.

On November 7, the Criminal Court (the Council Chamber) renewed the detention of Hamed Sedeek for 45 days in connection with Case No. 1356 of 2019 (Supreme State Security). despite exceeding 3 years in pretrial detention.

Sedeek was arrested on September 23, 2019, which means that there are no legal justifications for his continued detention, as Sedeek completed his third year in pretrial detention nearly two months ago, and the Code of Criminal Procedure stipulates that the period of pretrial detention should not exceed two years.

On November 12, the Court of Cassation set next February 11, 2023, as a date to examine the appeal filed by the Association for Freedom of Thought and Expression and Ahmed Ragheb for Law and Legal Consultations on behalf of Mawaddah al-Adham in the case that’s known in the media as “Tik Tok Girls Case”.

The appeal was filed challenging the sentence issued by the Criminal Court on June 20, 2021, against Mawaddah to 6 years in prison, in connection with Case No. 4917 of 2020, Sahel Felonies, registered under No. 2016 of 2020 North Cairo, in which the Public Prosecution charged her with human trafficking and commercial exploitation of two children by publishing video clips of them on social media.