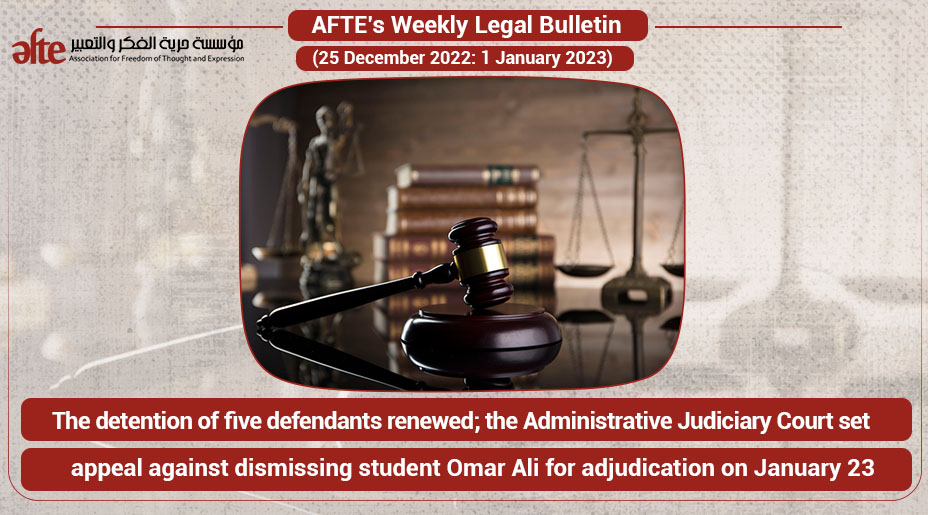 On December 27, Borg El-Arab Prosecution in Alexandria decided to renew the detention of Moaaz Rizk for 15 days in connection with investigations of case No. 6777 of 2022 (Borg El-Arab administrative).

The Master’s student was arrested on November 2; he faces charges of joining a terrorist group and possessing publications that promote its idea.

On December 27, the Criminal Court (the Council Chamber) renewed the detention of both Ahmed Adel Sultan and Fahmy Mohamed Mahmoud for 45 days in connection with Case No. 1480 of 2019 (Supreme State Security). Security forces arrested Sultan on September 12, 2019; the two defendants face charges of joining a terrorist group and spreading false news.

Abdel Halim was detained for a year pending his first case till the Criminal Court replaced his detention with one of the precautionary measures; however, later, Abdel Halim was rotated into the current case against charges of joining a terrorist group, spreading false news, and misusing social media.

On December 29, the Criminal Court (3rd Terrorism Circuit) renewed translator Marwa Arafa’s detention for 45 days in connection with case No. 570 of 2020 (Supreme State Security). Despite that, Arafa exceeded two years in detention, the maximum period of pretrial detention stipulated in Egyptian law.

Security forces arrested Arafa from her house in Nasr City; two weeks later, she appeared before the Supreme State Security Prosecution, which charged her with joining a terrorist group with knowledge of its purposes and committing a financing crime for a terrorist purpose.

On December 25, the Administrative Judiciary Court (Sixth Circuit) set next January 23 as a date to adjudicate appeal No. 57029 of 74 filed by AFTE challenging Thebes Higher Institute of Engineering’s decision to dismiss student Omar Mohamed Ali. The Court also authorized Omar’s defense to submit case-related documents for a week.

The appeal was filed against both the Minister of Education and the Dean of Thebes Higher Institute for engineering in their capacity as the Institute’s administration permanently dismissed the student Ali despite him going through compelling conditions that prevented him from attending his lectures and exams, represented in being detained in connection with Case No. 174 of 2015 (West Cairo Military Felonies).