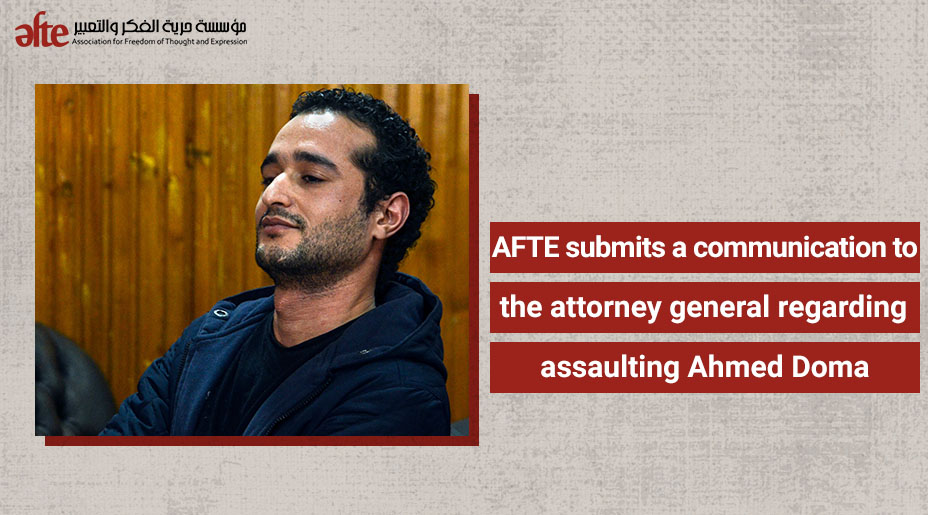 On July 25, the Association for Freedom of Thoughts and Expression submitted a communication to the attorney general, Hamada El-Sawy, against the deputy warden and head detective of Tura Prison, in addition to a member of the prison force, officer Ahmed Elwakeel, regarding assaulting activist Ahmed Doma and preventing him from necessary medical care.

On July 19, the deputy prison warden and officer Ahmed Elwakeel tied the hands and feet of Doma – who is serving a 15-year prison sentence pending the case known in the media as the Council of Ministers’ events, using handcuffs and assaulted him with their shoes, causing injuries and bruises in separate areas of Doma’s body, the prison administration also prevented him from reporting the assault incident.

AFTE urges the attorney general, Hamada El-Sawy, to urgently open an investigation into the incident of assaulting Doma, hold accountable those responsible for it, and provide Doma with the necessary medical care to recover from injuries as a result of being assaulted in prison.

The Court of Cassation rejected, today, the appeal submitted by the political activist, Ahmed Saad Douma, against the ruling of the Cairo Criminal Court, and upheld his 15 years imprisonment sentence and a fine of 6 million pounds, the value of damages in the case known as the Cabinet Clashes.