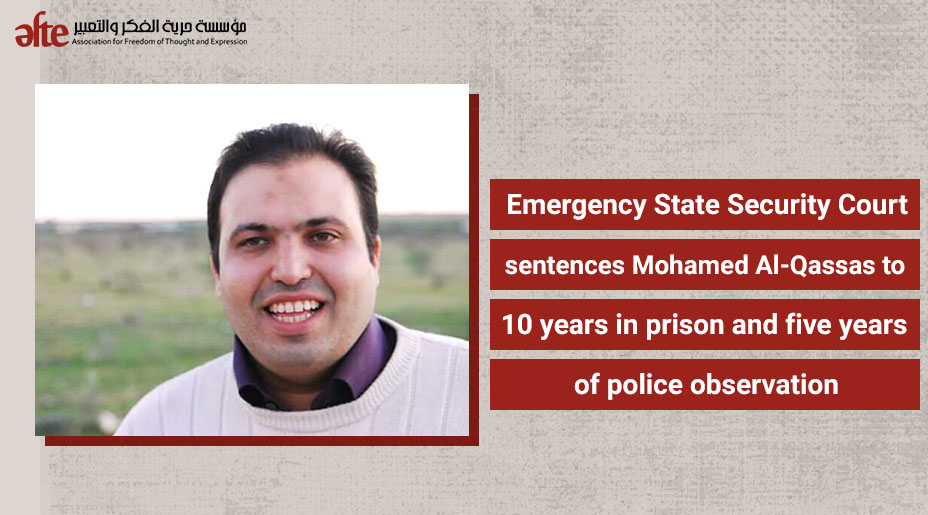 Today, the Emergency State Security Court sentenced Mohamed Al-Qassas, vice-president of the Strong Egypt Party, to 10 years in heavy prison and police observation for five years as soon as the prison sentence ends.

This came in connection with Case No. 1059 of 2021 (the 5th Settlement Emergency State Security Felonies), in which Al-Qassas is charged with joining a terrorist group with knowledge of its aims.

Today, The Criminal Court (Circuit 3 Terrorism) decided to adjourn the trial session of Mohamed Al-Qassas in connection with lawsuit No. 1059 of 2021 (the 5th Settlement Emergency State Security Felonies), to December 28 session for the defense’s panel access to lawsuit papers.

Al-Qassas faces charges of joining a terrorist group, and last June he was rotated for the third time in connection with the current case despite his solitary confinement since 2017.

“Al-Qassas” is facing charges with joining a terrorist group with knowledge of its aims, and since his arrest in February 2017 in implementation of the public prosecution’s warrant to bring and seize him pending Case No. 977 of 2017 Supreme State Security, to be recycled in three other cases, despite being in solitary confinement.