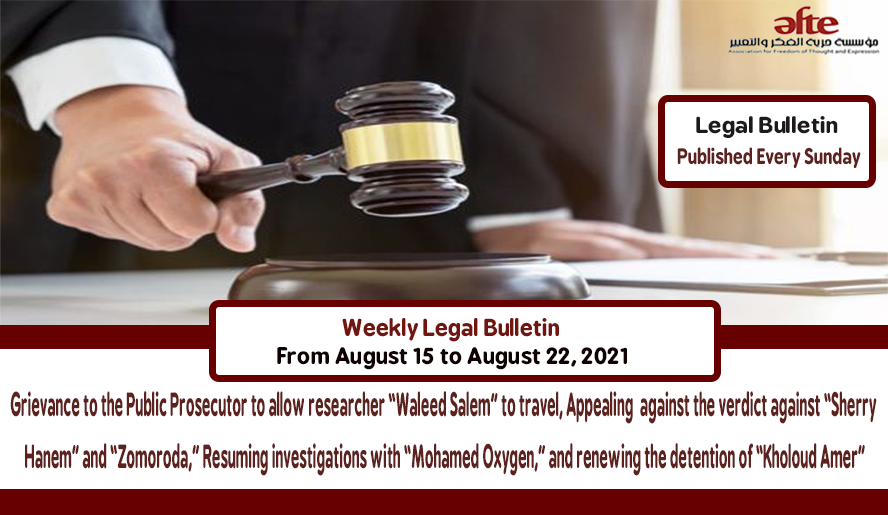 Grievance to the Public Prosecutor to allow researcher “Waleed Salem” to travel, Appealing against the verdict against “Sherry Hanem” and “Zomoroda,” Resuming investigations with “Mohamed Oxygen,” and renewing the detention of “Kholoud Amer”

In conjunction with Ahmed Ragheb for Law and Legal Consultations, AFTE filed a memorandum of reasons of appeal against the negative verdict issued by Cairo Economic Court, pending Case No. 370 of 2020, misdemeanor appeal, that impose 5 years imprisonment and a fine of 100 thousand pounds against both “Sherifa Refaat Abdel Moteleb” known as “Sherry Hanem,” and her daughter “Nora Hesham Ahmed” known as “Zomoroda.” This comes within AFTE’s efforts in defending TikTok Case defendants.

The memorandum of appeal against the appealed verdict was based on the following reasons: Violation of the law by ignoring and disregarding the implementation of the second paragraph of Article 32: Penalties and imposing multiple penalties on the two appellants, as well as ignoring and disregarding Article 71 of the Constitution and Article 29 of Law No. 180 of 2018, and the appeal judgment based on false confessions prohibited by law in convicting the two appellants, corruption in reasoning, error in understanding the reality, violation of the evidence established in the papers by reliance on contradictory facts and evidence that is not objectively acceptable, deficiencies in the statement and causation by not responding to the essential defense presented by the defendants’ lawyers, and not invoking the element of habituality in the crime of prostitution in the appeal judgment.

The Council Chamber of the Criminal Court renewed the detention of “Kholoud Saied Mohamed Ibrahim Amer” for 45 days, pending Case No. 1017 of 2020, Supreme State Security.

On April 21, 2020, security forces stormed Kholoud’s house in Alexandria, arrested her, and confiscated her phone, and after being subjected to enforced disappearance for a week, she appeared in the State Security Prosecution, pending Case No. 558 of 2020. On December 13, 2020, she was released, and in less than a month, the prosecution decided to detain her again pending the current case with the same previous charges.

AFTE filed a grievance No. 35309 of 2021, to the Public Prosecutor “Hamada Elsawy,” urging to remove the academic researcher Waleed Salem’s name from the travel ban list, after being banned from traveling twice; the first time on May 8, 2020, while he was attempting to travel to the USA, his bags were searched and his passport was confiscated, and the second time was on May 24, 2021, while he was heading to Cairo Airport to travel to France, and he was informed that his name was added to the travel ban list upon a decision issued by the Public Prosecutor on the previous day before his travel on May 23, 2021, without providing clear legal reasons or a specific period of the travel ban.

According to his lawyer, the decision to add his name to the travel ban list occurred against the background of Case No. 441 of 2018, as he was arrested on May 23, 2018, after meeting with a professor, through his work on his doctoral research on the history of the Egyptian judiciary, and after six months, he was released and later on, the precautionary measures were annulled, confirming that he benefits from the presumption of innocence, and there’s no judicial verdict issued to convict him.

“Oxygen” was arrested on April 6, 2018, pending Case No. 621 of 2018, he was rotated twice; the first time into Case No. 1356 of 2019 and after a decision to release him was issued, he was re-investigated into Case No. 855 of 2020, and due to the continuous renewal of his detention and the violations he’s facing, “Oxygen” tried to end his life in protest against what he is being subjected to, but his life was saved at the last minute.

45 human rights organizations are in solidarity with the Executive Director of the Egyptian Initiative for Personal Rights, Hossam Bahgat, a week before the verdict in an opinion case

Top secret .. How did laws restrict the circulation of information in Egypt?