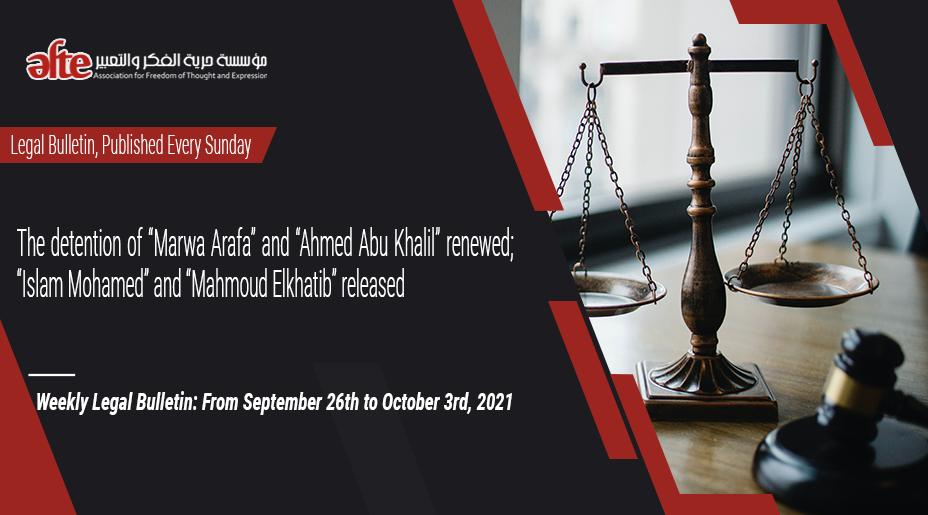 Security forces arrested “Abu Khalil” from his house in June 2020. He was subjected to enforced disappearance for ten days. Then, he appeared at the Supreme State Security Prosecution in connection with the current case, where he faced charges of joining a terrorist group and spreading false news.

The court also renewed the detention of “Marwa Arafa” for 45 days, pending investigation into Case No. 570 of 2020 (Supreme State Security).

A six-man security force arrested “Arafa” from her house in Nasr City on 20 April 2020, and confiscated her mobile phone and sums of money in her possession. She was held in an unknown place for 14 days until she appeared at the Supreme State Security Prosecution in connection with the abovementioned case.

In another context, the Criminal Court issued a decision to release “Islam Ali Mohamed” in Case No. 1898 of 2019 (Supreme State Security).

The decision came with precautionary measures as a complementary punishment that is alternative to pretrial detention. These measures require the defendant to hand himself over to the police station in his neighbourhood for a specific number of hours during the week, according to Article (201) of Law No. 150 of 1950 of the Code of Criminal Procedure.