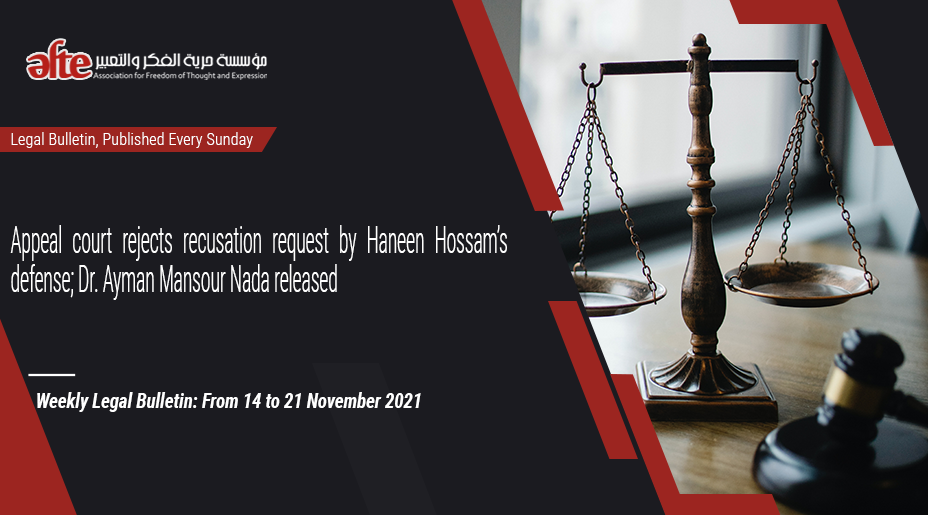 The Appeal Court on 17 November rejected a recusation request submitted by the defense of content creator Haneen Hossam. This came during the first session of Hossam’s retrial in connection with Case No. 4917 of 2020 (Sahel Felonies), registered under No. 2106 of 2020 (North Cairo), which is known in local media as the “human trafficking” case.

Hossam’s defense has earlier demanded that the case be referred to another court, as the Criminal Court had previously considered the case and issued a verdict on 21 June, sentencing the defendant in absentia to 10 years in prison and ordered her to pay a fine of 200,000 pounds.

The next session of Hossam’s retail is set to be held on 20 December.

In January, the Cairo Economic Court acquitted Hossam of charges of infringing on family values. The Public Prosecution had referred Hossam to the Cairo Criminal Court during the course of the first case examined by the Economic Court, but this time on charges of exploiting two children by inciting and helping them to join an electronic application and create video content on it with the aim of gaining financial benefit.

On 17 November, the Cairo Appeal Prosecution decided to release the head of the radio and television department at the Cairo University’s Faculty of Mass Communication, Dr. Ayman Mansour Nada, in connection with Case No. 23 of 2021 (Cairo Appeals).

Nada is involved in the case for writing articles criticizing shortcomings at Cairo University, including several financial and administrative violations, supported by documents. This led the president and advisors of Cairo University to submit reports against him to the Public Prosecutor.

Nada faced charges in the abovementioned case of insulting and slandering the president of Cairo University and several university officials and using his Facebook account to commit a crime.